I have a 2013 F150 with Sync2 Nav that I recently replaced with a Sync3 system w/Nav out of a 2020 F150. It is currently running 3.4 but I’d like to update to the newest release. I made a usb installer but have a question before I even try the update. Since the system came out of a 2020 F150 does that mean it may have issues with the install. I know the warning msg I got during the download to the usb mentions possible formatting issues. Does this apply to my setup and is there a way around it if so?

Do not whatever you do run the update before you know for sure, as it could brick it.

Edit: sorry just read you are already on 3.4, the reformat process is what can kill it, so as long as you upgrade and don’t use the downgrade then reformat option you should be OK.

Ok so if I insert the usb since it is 3.4 already then it will NOT reformat is what you are saying? Just trying to make sure I have this right.

Owner of Ford EcoSport 2018, EU, sync 3 build 19205. I have update my map recently, from Ford.uk.
If I go to update my sync to any version, what version is more stable then other.
If I want to update only my maps, voice and others things from NAV, what should I do?

You cannot update only the maps unless you stay on Sync 3.0. You are stuck with what you have at that point.

Here is the file you requested from the USB I set up.

Here is the file you requested from the USB I set up.

Your autoinstall.lst file is set up to reformat. Do NOT use it.

If you want to just update to the latest release, set the current version in the app: enter your current build, region NA, Nav checked…save the config…
then enter the region, latest (or desired) version, and select KEEP EXISTING MAPS. It should look like below.
You can uncheck Gracenotes if you already have it installed since there has not been an update since 2018 or so for NA.
Select continue, let it do its thing and when done, you should be good.
You cannot update the maps without using the reformat tool in your scenario, even if you were able to get the Ford released and packaged map installer, it will not work because the APIM ID does not match up with the VIN in Ford’s databases. Ford uses a signed cert to license the install based on the VIN and APIM ID for NA.

Do you know the part number on the unit? It will start with LL3T or KL3T-xxxxx-xxx. 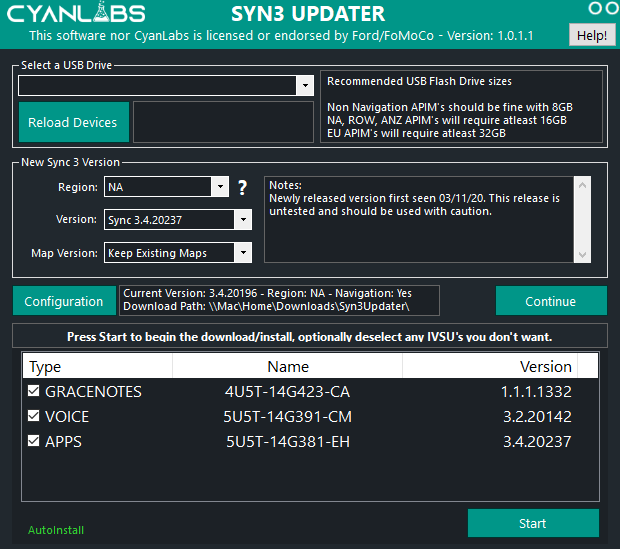 Thanks for the response, I really do appreciate it.

I don’t have the part # available. I tried to be careful and make sure I did everything right when I put it in but didn’t think about taking a picture of the mod/part tags until after I had it installed. I may pull it back out to do that. Everything appears to be working except the Nav is not working as far as tracking my correctly. The speed I travel and direction is off. I turn right it may go straight. Question weather it’s the gps antenna. That was one thought why I wanted to do an upgrade, thinking maybe a refresh of the software would fix it. I’ll see what I can do to get the model #.

I will definitely contribute to this site. It has been very helpful. I’ve read a lot on here.

No need to take it apart. Using FORScan, you can see it in the modules tab on the first, or top, menu to the left. There will be a list of the modules and info about them.

Do you get a NAV Fault message? If it’s one of those cheap gps antennas, it’s probably got issues. Some of the connectors on those are cheap and the center pin pushes in. It should be a very snug fit on the APIM antenna port. If it is loose, no good. Look at the pic below, this one is a decent antenna and proven, but I don’t know the part number. 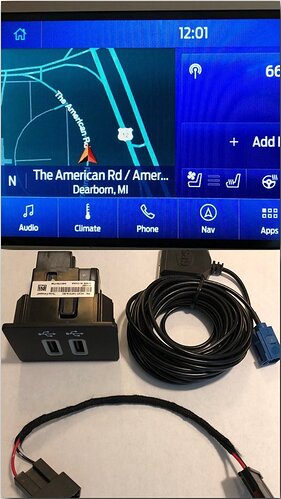 The problem with the cheap GPS antenna’s seems to be the length of the cable, probably not the best quality cable. When I did my swap to Sync 3, I bought a cheap antenna from ebay and experienced issues with the Navigation (slow to fill the map and unresponsive). I bought a second antenna and had the same issues, so I thought I would have a go at shortening the cable on the first one I bought to see if it made any difference after reading on various groups about people having the same issues. It was much better with the shorter cable, but I wouldn’t say it was 100%, still slightly slow to draw the map.

I ended up buying an antenna from a Renault which seemed to be recommended buy a number of people and it’s been fine since. I still have the shortened cable one as a spare should anything go wrong with the Renault one.

The problem with the cheap GPS antenna’s seems to be the length of the cable, probably not the best quality cable.

Yes. The less expensive antennas use a low gain amplifier with a higher than optimal noise floor, combined with a long cable which is inadequately shielded, and they don’t work well. This slows down the nav system noticeably. The Renault antenna is a good one if you can find it in stock.

What moves do I get? What files can I download and which not? Can you help me with steps?
How will it be my autoinstall.lst? How safe it is for my car and my sync? Thanks! 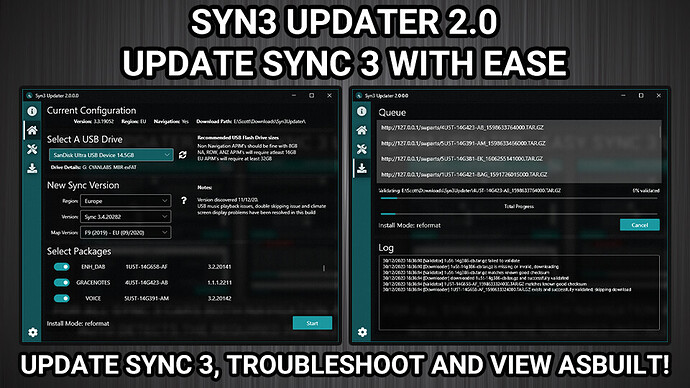 Syn3 Updater is the successor to FordSyncDownloader and is designed to make the upgrade of SYNC 3 even easier than before!