Please describe in detail your issue below
…
I have the newest version of sync and the newest version of iOS on my iPhone ever since the truck was new when on Apple car play people say they can’t hear me on the other end that being said I have been told that downgrade your sync version to 19101 should fix the issue. Keep in mind I’m new on here so don’t beat me up to bad. My old truck was a 2018 and CarPlay worked perfectly but this volume issue is getting old the dealer doesn’t seem to be much help

Your problem is likely due to a Bluetooth issue, not Sync version. This is quite misunderstood with this technology. Your current truck and Sync system is nearly identical to your older system, but the Bluetooth profile has changed.

Do this, this is what Ford should have told you:

I have tried that…it happens with my wife’s phone as well. I’m not sure what else to do with it really there are a lot of people on another forum I’m part of that are having the same issues with sync. Ford tells me it’s a software issue that’s where people are getting this from that if you go to a earlier version it will fix it. Thanks for your response and if you have any other ideas I’m all ears

Which forum are you referring to? I’d like to read the issue.

Other than rolling back to an earlier Sync version, I don’t have any suggestions. But, if this were a Sync software issue, you would think that everyone with an iPhone would have the same issue. There was an issue with FordPass about a year ago that required a re-installation of iPhone software to fix. This was a compatibility issue between FordPass and Apple. It might be as simple as a Bluetooth profile issue.

BTW, there are several documented issues with Waze causing similar issues on the Sync platform. If you are running Waze, delete it entirely from the phone and reboot the phone.

The issue has been reported on ford-trucks.com and also fordtremor.com it seems to be limited to a lot of superduty owners

This is an old issue with CarPlay implementation on the Sync system. Both Ford and Apple have blamed each other for this issue, but it is apparant that Ford really has an issue with the way it implemented CarPlay in the newer F250+ (SuperDuty) platform. This has been an issue since the new generation SuperDuty was launched in 2017/18. I have not seen any resolution to this issue other than the mentions of rolling back to previous Sync versions.

Pretty easy actually. Get the Syn3 Updater installed on your computer, and follow the instructions for an upgrade, but perform a downgrade. Read thru the documentation so you are familiar with the app.

At this point the app will download the files and copy them to the USB. Once done, insert the USB in the truck USB hub and install the “update”. Make sure that there are no other devices connected to the USB ports.

Here is what you want to select: 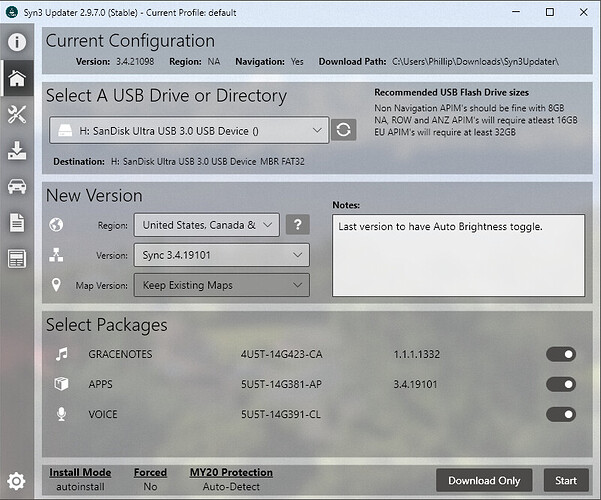 Thanks you have been more than helpful do you think this could fix the issue?

I have not had the issue or had to troubleshoot it, but the recommendation from the internet is to downgrade. I think it might, but I cannot guarantee it will.

If you are having issues downloading you can download the files from Software Database - CyanLabs with a browser and place the files in the Syn3Updater folder manually, then make the usb with the app.