There are 3 install mods that will be referred to as "Autoinstall", "Reformat" and "Downgrade", the latter is basically the first 2 in one.

By default Syn3 Updater will use "Autodetect" this is the automatic detection mode, you can override this by changing this setting.

Below is a brief description of what each mode does and the pros and cons to them.

This is the standard SYNC update procedure, think of it like a simple windows update or phone update. It simply copies the new files to the eMMC (storage) and then replaces the existing file or files with it.

This uses a official (all packages must be signed by ford) tool that was leaked in to the wild, this tool will do what essentially a format and re-install of your computer would do, it completely removes all (almost) data and reformats the eMMC (storage) ready for a fresh configuration. Literally without this leaked package none of this would be possible.

This is a hybrid method combining parts of the AutoInstall and Reformat as one. Essentially when reformat is used it will downgrade your post 3.4.19274 SYNC to 3.3.19052 this allows for the reformat tool to be used. once at this stage everything is the same as the reformat.

NOTE THAT IF YOU HAVE MY20 PROTECTION ENABLED, THIS WILL FORCE AUTOINSTALL AND THE BELOW DIAGRAM IS OBSOLETE 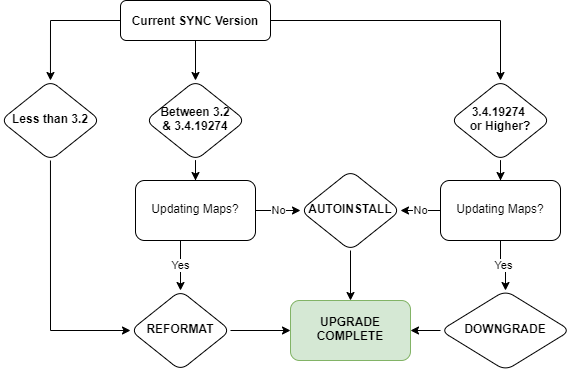