So I have been rehashing the situation in my head regarding the new 4G TCU’s and, at least with my 2013 C-Max and some other owners as well, where they are either missing some data points (EV Trip Data) or some data is delayed.

Reviewing the module network details in my workshop manual it looks like the majority of the data going to the TCU passes through either the GWM or IPC.

Upon review, it looks like these two modules are fairly inexpensive. And I’ve finally found the documentation on the Forscan forums concerning updating the IPC in the C-Max which basically notes that doing so in-vehicle is problematic but it should be possible on a bench just providing power and CAN connectivity to Forscan.

My thought process would be to eventually pick up a spare IPC and GWM and use these as guinea pigs while the originals remain as backups in case things go south. I know the IPC would need to have the odometer updated which I think is possible through Forscan (only increasing the mileage, can’t decrease. So the donor IPC would need to be under my current mileage).

Is there potentially anything else I’m missing in this process? Any other caveats I should be aware of? Hopefully swapping these modules won’t require any further configuration/reprogramming or initialization in other modules?

I only have info for a 2018 C-Max, but it looks like the GWM is the same (nearly) as the GWM’s used in the CGEA 1.3 vehicles. The asbuilt structure looks identical, but the values are mostly null. Is this the same as you have?

Different part #s and calibration levels, but the AsBuilt is identical save for 716-14-01 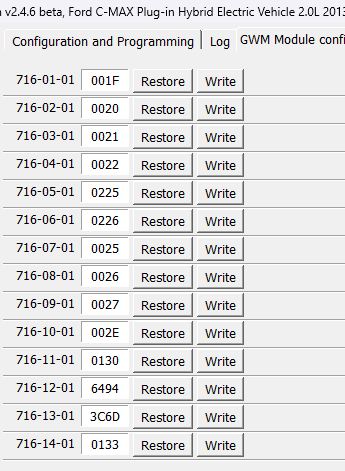 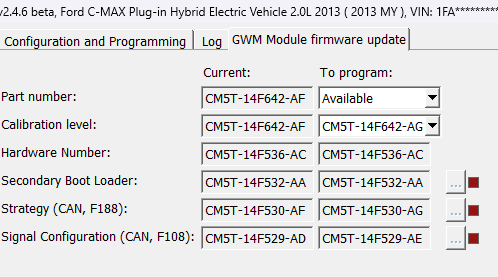 The ultimate intent is to basically keep my existing modules as good known backups and and use the ‘donors’ and update the calibration on those and see if that improves anything regarding the TCU functionality (or maybe get lucky and have some new stuff in the IPC to play with). Since this is my primary vehicle I don’t want to risk bricking it updating the original modules.

The TCU I’ve been keeping tabs on and updating to the latest calibration as they show up on DSFM. Latest for those is as follows:

It looks like obtaining a 2018 GWM might be the first step, and then see if there are any newer GWM firmware available. I understand the concern with the spare parts. Been there.

Thanks for the TCU file update.

Apparently the latest GWM part # I can find is CM5Z-14F642-H. Those don’t seem to be too common on eBay unfortunately. I am seeing a bunch of CM5Z-14F642-A’s however. Not sure if there’s any significant difference other than calibration on these to where the A can be upgraded to the H level or later?

The more I read into things though, the more I’m leaning about 60% the IPC being more likely to be the key player in this. There is a note in Ford’s 4G upgrade program documentation that 2017 C-Max vehicles specifically must have the IPC updated during the upgrade process. Up til now those of us DIY’ers have assumed it was due to a rare combination of trim levels and options where some Energi models could be key ignition equipped and during remote start the IPC says ‘Push brake to start’ like it is keyless and the IPC update just gets rid of this. But maybe there’s more to it than that?

Additionally, technically my 2013 is not listed in their program. Just 2014 and up models. I had assumed based on the vague wording it was just the labor coverage but I guess there could also potentially be some compatibility issues involved (that hopefully updating these modules may fix if that is the case? Hence this attempt).

The more I read into things though, the more I’m leaning about 60% the IPC being more likely to be the key player in this. There is a note in Ford’s 4G upgrade program documentation that 2017 C-Max vehicles specifically must have the IPC updated during the upgrade process.

Being this is a C1CMA vehicle, I believe you are correct. I think the GWM is there for the SDL feature (?), not really doing all that much. The IPC, however, we know does a lot more in the non-GWM vehicles.

Additionally, technically my 2013 is not listed in their program. Just 2014 and up models. I had assumed based on the vague wording it was just the labor coverage, but I guess there could also potentially be some compatibility issues involved (that hopefully updating these modules may fix if that is the case?

I don’t really see a difference between the model years, so I suspect you are right.

So the IPC looks to be something to move to the front of this project at this point. GWM is still in the running though especially given how cheap they are.

One question with that in mind is the compatibility of the IPCs from newer model years. Everything I’m seeing implies they should be. The only reason why this is still a question mark is they’ve made a lot of visual and functional changes over the model years (I don’t know where the changeover happened specifically). Stuff like a lot of the efficiency data was moved to the right hand side screen and there’s a new EV power usage display that breaks out propulsion, climate, and ambient temp drains that didn’t exist on these older ones. I imagine all the data is there in the vehicle already but just enabled in the new IPCs.

Not saying I HAVE to go with a newer one. Could just as easily get one from a 14 or 15 and stick with the original calibration update plan. But would be cool to play around with one of the newer ones and the added features.

Ultimately I’ll probably have to put this on the backburner for the time being due to not having the disposable funds at the moment for a ‘toying around’ project but I can at least start planning out how this is going to go.

EDIT: Also for documentation/reference purposes: Finally tracked down the notes about issues with doing IPC calibration updates on these in vehicle with Forscan. The suggested process to do it ‘on the bench’ seems simple enough. Ironically I tore down an old 3D printer I had in mothballs so I have a nice 12v 30amp supply I can use now.