For some time I’ve trying to find a good app to use as blackbox while I’m driving.
I don’t care about video and audio, just GPS tracking.

I’ve tried a few, but they do not record speed, they just create a gpx file which has coordinates (you can deduce velocity based on the displacement, of course).

This is my ideal app:

Any idea if such an app exists?.

I’ve used a few over the years but no idea what they were called, if you find one let me know

I’ve found this one https://play.google.com/store/apps/details?id=com.zihua.android.mytracks

It works ok, but it’s a bit simple. There’s no auto start, so you need to manually start the recording. It has some useful configurations, just like how “fast” the data is recorded.

At the end of a trip, there’s a summary and you can export the data to a file, which contains the speed in meters per second. And of course, the location.

You can also reply the trip on a map, but no color coding.

And it can show some graphs 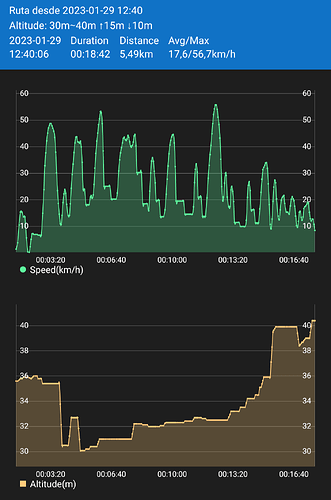 According to that graph I was never stationary, which is not true…

The good thing about the app is that it’s not cloud based, so the trip is saved locally unless you action on it.

I’ve found another app, it auto tracks when bluetooth is paired, but it uploads the trip to the cloud… I’ve not tried that one yet due to privacy concerns.
But this app is thought to track fleets, you even have a dashboard on a site to view the information. That plus the auto-start when bluetooth is connected would be awesome, since it’s a real black box. But I do not feel comfortable with the cloud part, not sure how the would or could use my data.