Ongoing issue for me… and this may not be the right place to post but maybe it is? I’m hoping @F150Chief would have some insight… over the holidays, I rented a '21 Ford Explorer that has the same Sync build as my BS (before updating to this latest one)… but one feature worked that still doesn’t work on my Bronco Sport. The center cluster “Audio” display WORKED on the Explorer for regular Radio RDS info. On my BS it only shows the frequency I’m tuned to, never duplicating the info that’s on the display like every other Ford with that capability does. Is that something controlled in Sync or perhaps the APIM? I don’t even know where to begin to try and get that working. Sorry if this is not the right thread for the question.

The center cluster “Audio” display WORKED on the Explorer for regular Radio RDS info. On my BS it only shows the frequency I’m tuned to, never duplicating the info that’s on the display

I’ll ask a dumb question which probably won’t help but may rule out a narrow corner case that I’ve personally seen related to this. It should also be asked if the Explorer and Bronco have HD Radio or not and is it enabled/disabled on either one?

On my 13MY C-Max, if I tune into a station with a marginal HD signal, it can show the old school RDS info on the APIM while it continues to try to lock in to the HD signal, but the display in the IPC most of the time will not display this under these scenarios. Either it’ll just show the station frequency or it’ll show HD and ‘Acquiring’. On the APIM display this will show as the ‘grey’ colored HD logo instead of the yellow one to indicate it sees an HD signal but doesn’t have a strong enough signal to lock yet.

In this specific scenario if I turn off HD, the RDS info comes in fine on both displays. Stations without HD (or far enough that it isn’t trying to pick up the HD signal that is there) that push out RDS will display fine as well.

Again, this is on a 13MY vehicle with the factory ACM. Not sure if this particular ‘quirk’ applies to newer vehicles and modules.

It should also be asked if the Explorer and Bronco have HD Radio or not and is it enabled/disabled on either one?

That is a good point.

In this specific scenario if I turn off HD, the RDS info comes in fine on both displays. Stations without HD (or far enough that it isn’t trying to pick up the HD signal that is there) that push out RDS will display fine as well.

This is what happens on my 2019 Lincoln Nautilus also.

Hi - and yes, that’s exactly the problem. The IPS does display data when streaming a station via CarPlay or Sync App Link - or even listening to Sirius XM. It just does not do it for any radio station data. I know it’s supposed to because I’ve seen it in similarly-equipped Ford vehicles. I used the Explorer as the most recent example where I observed it working the way it’s expected.

I’ll ask a dumb question which probably won’t help but may rule out a narrow corner case that I’ve personally seen related to this. It should also be asked if the Explorer and Bronco have HD Radio or not and is it enabled/disabled on either one?

HD Radio was enabled in the Explorer. It’s also enabled in my Bronco Sport. I program a nationwide network of stations carried on HD, which is why it’s important to me. I was listening to my programming in the Explorer and seeing all the data I would expect on the IPS, mirrored from the radio. This is extremely helpful when I have CarPlay up but I keep the radio on. When HD is turned off, the BS still doesn’t display any of the data on the IPS. Just the frequency. I just went out to test it.

Right… I’m not saying this is HD or regular RDS specific… though it could be something specific to the BS… I’m wondering if there’s a way to make it work? The IPS is obviously receiving data from other audio sources. It’s super bizarre.

I appreciate that - thank you! Maybe it’s just a setting somewhere in system that just never got turned on? I honestly don’t know!

I tested about 8 stations, both HD and standard FM, and found the following behavior with my wife’s 2019 Lincoln Nautilus…in Houston. These were tested back-to-back and alternating with SiriusXM to flush the buffers, if it at all made a difference. BTW…all of my testing was done on Sync 3.4.21265.

With HD enabled on the radio thru the APIM menu: Tuning to a station without an HD broadcast channel shows the station frequency only in the IPC. When tuning to a station with HD capability, the IPC will show the frequency, then go blank, then show the RDS info once the HD channel successfully acquires the HD channel. Once the station has acquired the HD signal, tuning thru the channels is seamless.

With HD radio disabled on the radio thru the APIM menu: There is no data sent to the IPC other than the frequency and station identifier.

Changing the ACM asbuilt for HD radio or not has exactly the same affect above. (You can see the asbuilt change when you disable HD radio in the APIM menu. You have to refresh the FORScan view for each change.)

The IPC in the 2019 Nautilus is one of the latest newer generations IPCs used in Lincoln and Ford vehicles. This does not mean that the Bronco IPC is the same but given the development age of the Bronco (not the production age), this behavior is not surprising. Since the IPC in the Bronco is receiving RDS data at all pretty much rules out the IPC as an issue.

I’ll do a little more research on the ACM probability.

EDIT: The ACMs are virtually the same between the 2021 Ford Explorer Platinum and the 2021 Ford Bronco Sport. See attached. These are the newer ACM units, like the F-150. The only difference I could find between a few vehicles is the speaker arrangement for the ACM and DSP. Otherwise, they use the same ECU Configuration and just a later rev of the Strategy in the Bronco.

Hello! So my Bronco Sport IPC is not receiving RDS data at all from Radio, HD or non-HD. The only data the IPC ever displays for Audio is if I’m streaming from Bluetooth or tuned to Sirius XM channels. The Sync headunit is the only one that will only ever display RDS/HD Data. It never gets passed along to the IPC like it does in the 21 Explorer or Edge, for instance. You confirming that the AMC’s are virtually identical with the Explorer does track with what I witnessed myself in person, but is strange it wouldn’t behave the same way. Hopefully you can find something more in the ACM probability? I have yet to find another Bronco Sport that displays RDS/HD data from radio in the IPS. Like I said, all other audio sources pass that data along. Just not radio for some bizarre reason.

@radiohouston could you message me your VIN so I can pull your asbuilt info to look at a few things?

Let us know if the HDR and RMI Entertainment settings work for you.

I am happy to report that @Livnitup is a GENIUS!!! I made that change in the ASBUILT for the IPC and BINGO… HD Radio song data in the IPC!!! I’m simply blown away. I cannot figure out why this wouldn’t be enabled from the factory…and I’m so thrilled. I can now have CarPlay running on the Sync screen and still make sure the RDS is correct for what I’m hearing! THANK YOU!!! 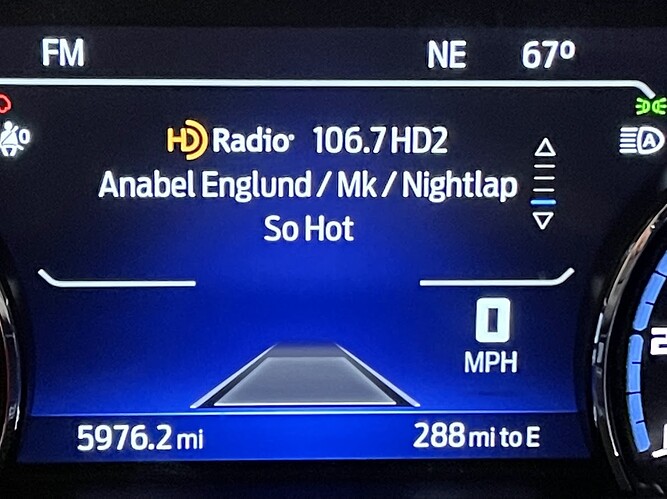