I thought I would post my observations after using the 3.4 updates for a few weeks for those sitting on the fence. We just returned from a 2500-mile trip and I had a great opportunity to use both 3.4 and Android Auto. (AA)

Overall, I’m happy with the results. The system itself seems to operate as intended. I’m not real pleased with the rather light backgrounds available as in some light conditions it is harder to view than the previous versions. Things do seem to happen much smoother now. But, I think the older Sync OS was a little more intuitive to use. After all those miles, I’m still fumbling to find things on 3.4.

I was surprised the Android auto requires the phone to be connected via USB. My old system did not. It will no longer connect using Bluetooth at least for me. Or perhaps it was my old phone as I recently replaced it. I’m pretty sure only Apple Play required the phone to be tethered with my 3.0 although I never tried it.

I never could see what folks get all excited about with Android Auto anyway. The only interesting thing to me is the satellite map view. Just interesting and not much more. Its like flying at 50,000 feet and the auto-zoom doesn’t seem to improve things much. All things considered, the Sync 3.4 Navigation system is far superior to AA for me especially when Sirius travel-link is used. Having the hwy exit info including gas prices and direct guidance to the pump is without a doubt the thing I enjoy the most. But all that was available with 3.0 already. Travel-link is really the only reason I subscribe to Sirius. Google Maps really isn’t that much better at updating maps than Ford to show a major changes to the traffic patterns as we ran into several that were behind that didn’t show recent construction. Recent meaning no cones or restrictions. But, at least you can back out of it fairly easily now. I wish you could simply hit one button on the main screen to go back to the complete Sync system.

One strange thing occurred with the AA. In the 3.0 system, it never would go back to Sync without completely stopping AA. None of the functions of Sync 3 were available and this was also the case with 3.4 until the last time I tried. For some inexplicable reason, all of a sudden after touching the Ford icon on AA, all of the Sync functions started reappearing and worked. Apparently, the system worked that bug out on its own after a couple of thousand miles. I guess the message here is to be patient. Windows does that sort of thing also and sometimes needs multiple restarts to get the registry in order. It looks like Sync systems do something similar. Sort of self-healing.

So, as of right now, my opinion of 3.4 was a worthwhile update. It will take some getting used to. I still prefer Sync to AA for trip guidance but without Sirius Travellink, I think the opposite would be true. Again, I’m glad I took the time to do the upgrade, and once again, thanks to all of you guys for making it so easy.

I was surprised the Android auto requires the phone to be connected via USB. My old system did not. It will no longer connect using Bluetooth at least for me. Or perhaps it was my old phone as I recently replaced it. I’m pretty sure only Apple Play required the phone to be tethered with my 3.0 although I never tried it.

I too don’t want to get into a discussion about Bluetooth, but I can say I had always connected Android Auto with Bluetooth. I didn’t mention you “usually” needed to connect the phone with a USB the first time AA was started but once connected the USB could be disconnected. I am aware Apple Carplay always required a USB connection. I will say, I was never happy with the AA connected either way. It was very temperamental and I attributed that to the conversion process when adding the 8" screen to my truck.

Without spending a lot of time I quickly found this youtube referring to this. Go to the 2:10 mark in the video. The guy makes reference to this but doesn’t really explain it in depth. 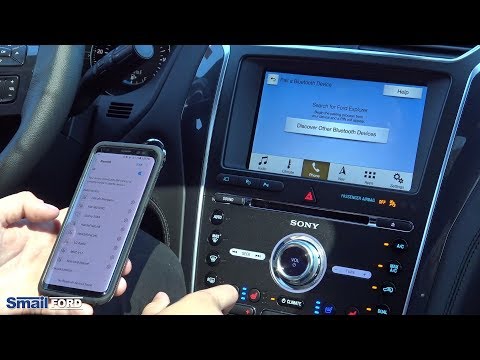 There are numerous other videos that explain how to connect wirelessly. Believe me, I appreciate very much your expertise on this system and the help and support you provide. My intention is simply to help others not to prove how much I know about this subject. which is very little.

That video at 2:10 specifically shows him plugging it in… AA needs to work over 5ghz wifi and the receiver needs to support it, you CAN NOT make AA wireless on SYNC 3 without using something like a AAWireless or similiar device.

AA does however continue to transmit the phone audio over Bluetooth

Bluetooth does not in any way shape or form have enough bandwidth to be able to transmit AA Video / touch input so i can assure you that this is wrong.

But, I think the older Sync OS was a little more intuitive to use. After all those miles, I’m still fumbling to find things on 3.4.

I noticed you said this, what is different in regards to the layout of SYNC 3.4 and before? i don’t recall seeing any changes from 3.3 to 3.4 perhaps these are US specific changes though?

Apparently, the system worked that bug out on its own after a couple of thousand miles. I guess the message here is to be patient. Windows does that sort of thing also and sometimes needs multiple restarts to get the registry in order. It looks like Sync systems do something similar. Sort of self-healing.

If you didn’t do so after upgrading, a Master Reset usually resolves latent bugs such as this and is always recommended here. It’s very common for Sync to hold onto random old settings after an upgrade. A Master Reset should clear all those out and start fresh from known defaults of the currently installed version.

Yeeks! He also clearly states when describing AA, “you can use it wirelessly, however, the first time you do need to plug it in to set it up.” I’m getting pretty old and the memory isn’t what it use to be, but I’m pretty sure it did, in fact, connect as I seldom if ever tethered my phone to the system. Sometimes when you didn’t want it to as it would connect as soon as I started the vehicle. With the phone in my pocket. I will add, it never worked well and eventually, I took the Android Auto app off my phone for that very reason.

However, would it be possible in any way for AA to be functioning using WiFi? I have unlimited data and I never shut the hotspot off. And the system auto connects to that WiFi every time I start the truck.

Anyway enough of that. I’m sure you are likely correct as you folks know a hell of a lot more about these things than I do. But if something weird was to happen, it would likely happen to me first.

Yes, as instructed I did do the master reset right after the install.

It 100% did not and probably never will work, you can not use AA via WiFi as SYNC 3 simply does not support this feature, the same applies to most cars around the same year as SYNC 3 was created, Wireless Android Auto was a thing later added to a very limited amount of cars and also via things like AA Wireless etc

There are quite a few minor changes that are just enough to confuse when traveling @ 75 MPH. Most of them I noticed were in the navigation mode and especially with Sirius Travelink. Little things like how the info is displayed for fuel and hotels on the highway exit pages. It’s still there, but different but often requires an extra step to get the info you’re looking for. The old system would display your next turn on top of the list with the next two exits following below. You would touch on that exit and the system would display the facilities at that exit and the prices of fuel for each. Touch your choice again, and it would add a waypoint into the route to take you directly there. Two taps and you were at the pump or hotel. Now it takes a few extra taps. And the order of the exits is different in a way I really haven’t figured out yet. I think they may fall off long before you pass that exit.

But throughout many little changes are just enough to throw you off. I would suggest that a trip be taken when someone else is driving so getting used to the changes won’t happen in the center of Nashville as it happened to me. A good example would be in the situation we encountered in there when they decided to turn a five-lane expressway into a single lane. The old system did a much better job of offering a re-route with ample warning. There was a warning, but in the form of minutes lost with no explanation or reroute offered. I ended up using Google maps on my phone to find a suitable reroute but made the mistake of setting the route to the shortest which, as Google Maps often does takes you on a goose chase through all sorts of sorted neighborhoods. But I can’t say how many times traveling through that area that the old system would re-route us via Briley Parkway to avoid the never-ending traffic on I 24. Didn’t happen this time.

But other little things that make little difference at all such as the term “highway” is now “motorway”. Or the European spelling of “favorite”. There is now a “u” inserted in the word. I would guess the files we use were likely meant for that market, not North America.

With over 300,000 miles behind a Ford Sync, I was pretty adept at finding what I wanted while cruising at highway speeds. On this trip, I was very uncomfortable. For certain things, you just have to navigate through the system a bit differently. But, I’m sure I will get comfortable with it eventually.

But other little things that make little difference at all such as the term “highway” is now “motorway”. Or the European spelling of “favorite”. There is now a “u” inserted in the word. I would guess the files we use were likely meant for that market, not North America.

Nope these are the same packages supplied to all regions, the maps and voices are different but the apps package is the same