A Bit Mixed - Suggestions for next step?

What is your SYNC Region? NA

Do you have Navigation? Yes

I’m curious what others think should be my next step, or if I should just leave things where they are on my 2020 NA Escape.

Since my issues are a bit SXM-related and a bit Gracenotes-related, should I…

a) Just de-update Gracenotes down to CB?

I’m attaching a file from my current setup. 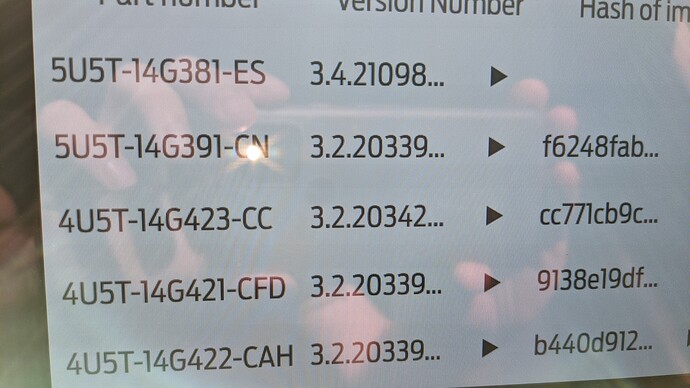 First thing, Gracenotes has nothing to do with SiriusXM. Gracenotes is only used for USB/phone music playback. The SXM issues are documented here and across various forums. 20351 seems to be the last version that worked. 21098 seems to fix the issue for some but not all.

NAV favorites erase on master reset, as does phone pairing and data. I recommend you perform a change to 20351, do a master reset, and see if the issues persist.

Gracenotes - thank you, I had no idea it wasn’t tied to SXM.

NAV favorites - I know they get erased on Master Reset. I meant, AFTER that, when I tried saving them, they only stayed saved until I turned off the ignition and the system powered down. Upon powering up again, all were gone, every time. That was after the de-update back to 20351.

One thing I changed since I posted that made my SXM issues a little better but not as good as 20351, was that I turned off the Tune Start and the other option that starts a song from the beginning of each preset (if available). I like that option but I think there is a lot of buffering that may be slowing things down and that also may be feeding a bit into the (non-Gracenotes) album cover image being so far ahead of the music. The music is buffered but the meta-data for the next song is not.

This takes significant resources in the ACM, not really the APIM, but as you say can cause issues. A lot of metadata for songs is transmitted near the beginning of the track, and not after that, so in some cases the info for the track will be wrong.

Given that the 20351 downgrade corrupted my ability to save NAV favorites last time, I think I’ll stay where I am on 21098. SXM is working MUCH better without the TuneStart/Preset Buffering. Thanks for helping me sort this out.