Just wondered if anyone has had this issue.

I have been on the current version of Sync 3 since it was released (21098 Europe with Nav in a Ford Focus 2014). It has worked flawlessly for me.

Then about 2 weeks ago I connected my phone via Android Auto (as I always do) and set a route on Google Maps.

As I was driving along, I noticed that the Nav Repeater in the instrument cluster was showing something different to the screen. The distances are correct but the turn indicator is different on most of the turns.

For example, the Sync 3 screen will show to take a right in 0.5 miles (correct) but the Nav Repeater will be showing a U-turn (i.e. go all the way around the roundabout and come back on yourself in 0.5 miles - incorrect). This only started happening 2 weeks or so ago.

Everything works fine on the standard Sync 3 navigation.

I can only assume that my phone received an update around 2 weeks or so ago (A Samsung Note 9).

I have tried a Sync 3 Master Reset and also disconnected the car battery for a couple of hours to reset everything but the issue still remains. I also did a complete reinstall of Android Auto on my phone and reset Google Maps. I also tried using Waze which also shows incorrectly.

I just wondered if anyone else had this issue that started fairly recently or if anyone knows of a possible fix.

It is only through Android Auto, the stock Sync 3 navigation works fine.

If you are comfortable with it, could you provide an example location where this occurs? I’m curious if it may simply be the type of ‘intersection’ and Google Maps is reporting it to Sync in a way that Sync is interpreting as a roundabout.

Have you tried other navigation apps like Waze in these same locations and determine what is displayed with them?

Ultimately with the way all of this functions behind the scenes and you noting it only happens when using AA navigation apps, my guess (and this is just a guess) is where you see this, Google Maps is interpreting the type of intersection differently than the factory nav which wouldn’t be unexpected.

I have tried Waze and it does exactly the same thing. Distances always correct, but turn indicator wrong.

I don’t have a problem providing routes but it does not seem to be route dependent as such as I have tried quite a few.

Basildon in Essex to Ware in Hertfordshire. Most turns are incorrect on the repeater. Some, however, are correct but mostly incorrect.

Billericay in Essex to South Woodham Ferrers in Essex. The same again, most are incorrect.

Basildon in Essex to Portsmouth in Hampshire. Most are incorrect.

Also, the reverse of the above routes. An example is coming along the A10 from Ware in Hertfordshire approaching the M25 roundabout. Sync 3 screen says first left which is correct. The Nav Repeater shows a go all the way around the roundabout and come back on yourself. Both show the correct distance of 0.2 miles and the audio is also correct.

Again, this is only when using Android applications and they are working correctly on the screen. They provide perfect navigation but only the nav repeater is wrong which is annoying.

Just to confirm, is the location/turn in this pic one of the confirmed spots? I’m not in the UK so not terribly familiar but gathered from your post that this was a potential one. 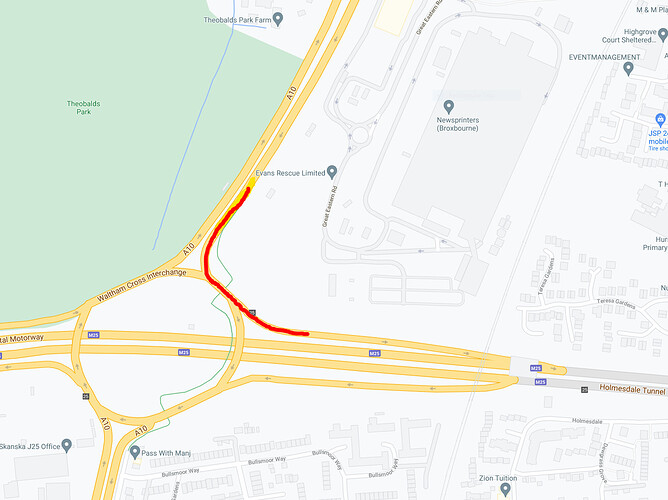 Yes, that is a location where the repeater is incorrect.

So I did manage to spoof my location and do a short ‘trip’ basically along that exact red line. The Nav repeater on mine just displayed the ‘Thru/forward’ icon for these turns (this I do have a video of). I may need to re-do and maybe try a longer stretch to make sure it has enough data to work with. Haven’t yet had a chance to try through the AA Headunit emulator which is my next task.

I’ve noticed the same issue on my MK3.5 Focus in Australia, not sure if it’s the latest Sync update or AA as it started after both were updated round about the same time at my end.
My current workaround is turning off the repeater as I’m just happy to finally have a stable AA connection. I’ve been through countless cables even though it used to work fine at Google’s AA support request, eventually they blamed my phone’s USB port.
Then the update to Android 11 on my device magically fixed my faulty USB port!

This is definitely an AA issue. I am not sure if it is specific phones.

I have tried some previous versions of Sync 3 and the problem still persists. Then I tried my daughter’s old google phone which has not had any updates in quite a while and the problem disappears.