Here is a unifi screenshot showing the wifi still connected 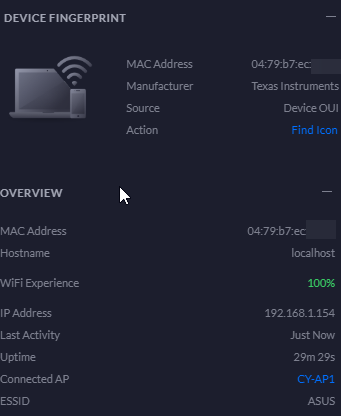 My phone also reports that it’s connected to AA via my AA Wireless adapter also.

Any one have any ideas? this has been bugging me for months and is the reason my battery was dead a few months ago.

That does not happen to me since my car cuts off the power to the USB ports once the engine is off and you open the door. But before purchasing the adapter I tested that, because my idea is of course to leave it connected all the time, which I can do since the unit powers off and nothing is broadcasted.

My APIM is running Sync3 3.0 though, not sure if that’s even relevant or not.

I also have a strange issue since a couple Weeks. Every time I get into my Car the Sync screen shows something that translates to „Powered off to save battery“.
I haven’t changed anything and the readout of the SoC of the battery always sits around 40%. I got the battery checked last week and it’s completely fine aside from the low SoC. I also charged the battery with a charger but after a couple days it was back at 40%

I am using a wireless CarPlay Adapter and already noticed a while ago that the connection is kept up oddly long after leaving the car. It does not reach into my house but it’s normally disconnected within 5 seconds of opening the door after the ignition is off.

After I read the conversation yesterday on Discord. I tried unplugging the adapter and immediately for 2 short trips now the Sync was not powered down but in standby after unlocking and opening the doors.

This still needs further investigation but my guess is that the APIM does not got into Standby properly when a USB AA/CP device is connected after the car is locked.

This seems to happen since I updated to 22251.
Fiesta MY2017 Reformatted APIM.

I’ll do some more testing and downgrade to a lower build as the previous one was fine.

Hmm, same car (mine is 2019, but same gen etc) … will bookmark this and review what you said and compare tomorrow.