Hi there, after a frustrating 2 weeks, another forum pointed me to cyanlabs! I’ve been looking, but need guidance, please.
We just bought a 2018 F150 XLT (Never owned a Ford before). I have an iphone and wanted apple carplay. Internet suggested an updated SYNC would make that happen. I went to Ford to get the update, entered my VIN, followed instructions perfectly and it broke (see photos). 2 days on chat with Ford said take it to Dealer. 3 Days at the dealer and they shrug and said waiting on Ford for help. In all of my communication, I keep explaining that the version Ford wants to “update” me to was lower than where we were. I didn’t take a photo before all of this happened, but my memory says the truck was SYNC 3 version 2.4 and it was trying to update me to SYNC 2.3 I have no idea about the build number. Ford says the truck should be on something lower than that. So now I’m wondering if the previous owner came here and got updated, but didn’t notify Ford, so it’s gone wrong trying to go backwards?

I only have a Windows desktop and a macbook laptop. I was attempting to try a manual SYNC 3.4 update, but got stuck in step 2 where it asks what version since I can only see a little radio tile. Any advice for this hurdle? Thank you so much! 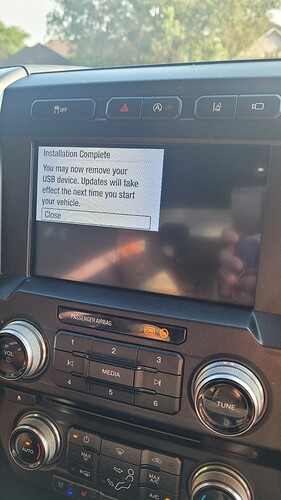 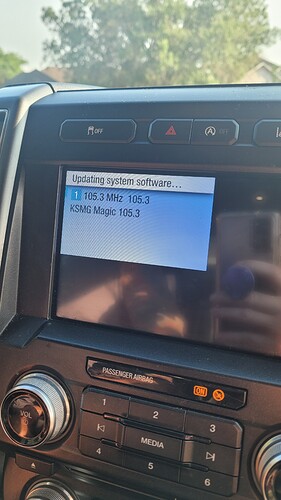 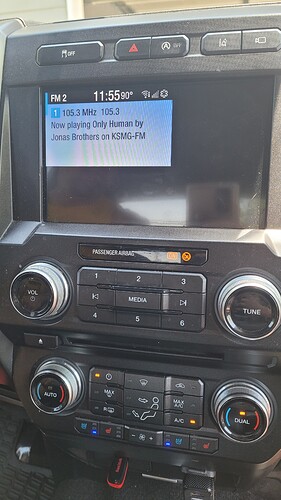 Install Type: Unknown / Not Sure

Do you have a error message, if so what is it?
I never got an error message. I only received “update is complete, remove USB”… but it’s still the same small image and never changes even after rebooting, reinstalling, letting the truck run for an hour… etc.

but got stuck in step 2 where it asks what version since I can only see a little radio tile.

You have installed a 4" version, not 8" version of the Sync software. Simple fix…but first, PM me your VIN. I want to check and see if the truck was originally equipped with the 4" version just to be safe. (XLT should have 8" screen if tech package.)

Thank you! I have looked for an envelope icon to PM you and brought in 2 teenagers… am I blocked? How can I PM you?

New users can’t PM people for obvious reasons, you should be able to do now

Thank you- and that’s a good call. I appreciate you allowing me access… I was able to send a message now.

Yes, the vehicle came with an 4" screen. Obviously the techs at the dealership are just not conversant on how to fix this. Ordinarily this would not be something they would deal with.

Thank you! I’m commandeering my son’s windows laptop tomorrow to do this. Stay tuned. I appreciate your guidance and promise to follow through with feedback!

Got a warning when I clicked “open interrogator log” in step 3, but it did fill in
Version JL7T-14G381-AJ
APIM Model: HB5T-14G371-CCA
is this the information you were looking for? 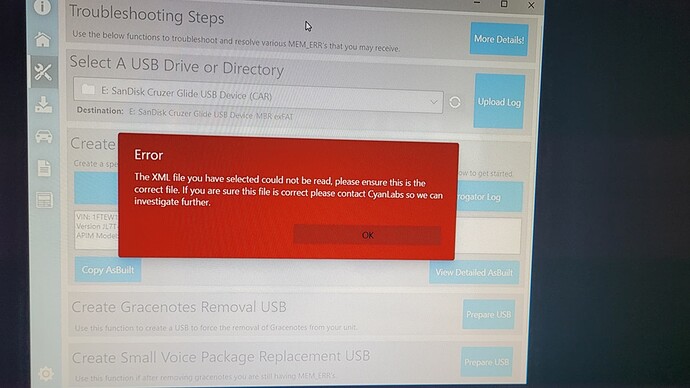 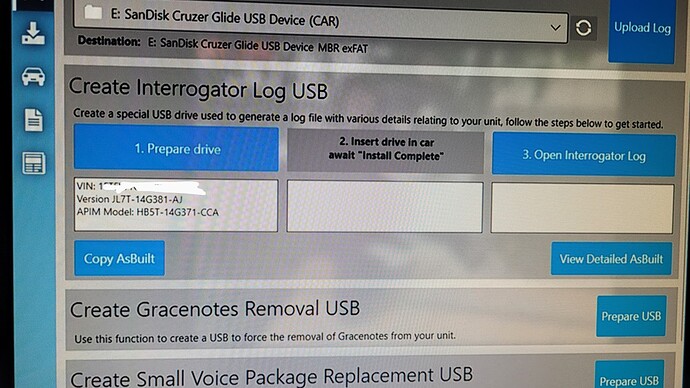 This happens sometimes, can you upload the xml file here please.

OK, nothing you did or Ford did was wrong. Based on the Interrogator files and OEM asbuilt, the previous owner swapped the Sync 3 units from NON-NAV to NAV, and when the dealer was trying to troubleshoot they loaded the NON-NAV asbuilt to the NAV unit. Thus, here we are. This can be fixed without issue.

Please don’t close this thread just yet. F150Chief has been corresponding with me via PM. The short story looks like the vehicle I purchased was upgrade from a 4" screen to an 8" screen. Using the Updater, I was able to restore the correct screen size, but the Navigation is still missing. Using the Ford VIN update file caused much havoc… F150chief has been great and the next step is to use the ODB adapter to regain navigation… I’m waiting on that piece. Hoping by Saturday. I’d like to post an update. Thank you!

Hello, thanks for the feedback.
Don’t worry, I won’t close it, I just wanted to know if there was some update since the thread went silent for almost a week.
Good luck with that, will wait for your update.

We are back in business! Using FORScan and APIM file assistance from F150chief, we have Navigation back! HUGE shoutout to @F150Chief! Not all heroes wear capes!