It’s Sync 3 based and I dont find anything in Oasis that it can be done. It is a Sync 4 thing with a GWM that has the memory to do this but I dont see anything in here saying that can be done.

Would be interested to hear what upgrade they are doing to make it capable of this. Seems it would have to include new hardware.

Seems it would have to include new hardware.

Yes it would. Sync 3 does not support wireless AA or CP natively, regardless of software updates.

LOl, I was just trying to be nice about it.

So Ford in my Town just lie me straight in the face… I dont know, but they are not happe to make update if i ask if they will do this when the car is to service

Really curious what they will do. Like F150 said it is not something Sync 3 is capable of. Definitly report back what you find out.

Sync3 is able to update via wifi, even using the mobile phone as an access point, I’ve ever updated it like this.

You just have to activate the update via wifi in the configuration and connect it to a router, nothing more.

Sync3 is able to update via wifi

That is not what he is talking about. He was told that Sync 3 will update his modules like it does in SYNC 4. This is incorrect as SYNC 3 does not do this and the car will not have the correct hardware to do it.

The last update completely ruined the operation of the voice control for navigation. Has this edition fixed the issue, does anybody know? Fiesta EU 2018. Voice control for find an address would just ask for the address and work with that but the 22100 wants it spelled out and cannot process the space between words. It is completely inoperative.

Trying to get this to run on syn3 updater installer163311 and all is fairly well until I get an error telling me it cannot find part of sync my ride. so I must be doing something wrong.

Decided to try reloading the stick with3.4. 21165 which appears to have worked and I’ll let the car try loading it tomorrow and find out if it fixes the navigation then try loading 22200 if it will let me.

I’m starting again from a known position. I shall load 22200 today.

Installed yesterday in my 2019 Expedition. Had previously installed 22020 and maps 2.20. Updated to 22200 and Maps 2.21. Only issue it took over an hour. The updating system software banner was there for that long and then the map update screen with the Mustang. I was getting worried but it now says it has the updated versions. What specific changes has anyone noticed?

Successfully installed on 2018 non-nav F150 Lariat from 3.4.22110 (originally 3.0.20204). No changes noted from 22110, compass working fine, still no Sirius channel logos. I have not tried to use anything using the Sync3 voice (I’m Android Auto all the way, baby!). For those with similar Sync3 units, had to delete Gracenotes (a tool is in the Syn3Updater) to give room for the upgrade, upgrade without Gracenotes, then install Gracenotes afterwards.

Installed 3.4.22200 on my 2018 ranger wildtrak, easey peasy… took approx 55 mins. Only issue i have now is ambient lights are not working. Were working prior to update 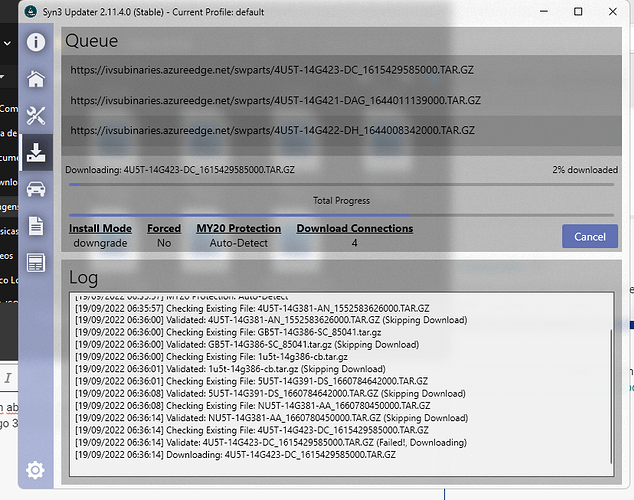