Hey Guys, Thought I would share a project I made in order to activate / turn on a Sync3 on the bench. 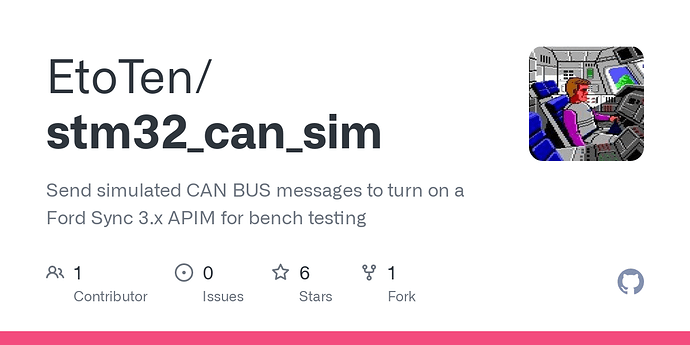 GitHub - EtoTen/stm32_can_sim: Send simulated CAN BUS messages to turn on a...

With the hardware and code you can update the APIM via USB and even connect to it via ForScan all while it is outside of the vehicle.

Let me know what you think.

Nice work, I could have done with this a year or so ago

I have been just using a gateway module to achieve this.

I did wonder if this was possible, how did you wire it in?

@CyanLabs this is why I sent you that module last year!

I just found a basic 120v to 12v DC plug and used the wiring off that into the GWM. I of course than have all 4 Networks in that and can just directly wire those in. Best to have the pigtail for the GWM also. You do need to use a profile in Forscan that has the modules in it though. I have programmed all kinds of modules with it and never had any kinds of problems. I even did a BCM one time this way.

Excellent many thanks for this! Can’t really get a better emulator than the real thing.

Per the profile, thats very true. I also ran into that with the APIM harness I made. At first I thought forscan was not working, but then I loaded a previously saved profile for a car that had an APIM and it was able to “see it” no problem. How did you handle ignition? Did you have a full ignition switch to work with? or a jumper? What about immobilizer?

I just unhooked power to simulate ignition. In most cases ignition status is transmitted through the network so reproducing that is difficult. Some do have a wire but that is becoming less common. For the BCM PATS was not needed as I was not starting the car with an ECM. Without a Forscan profile that includes the modules your trying to access it is pretty much impossible unless there is a way I am not aware of.

Bill,
I think I know what I’m doing today…looking for a GWM!

What about external devices connected to the APIM, like cameras? I supposed these will not affect the programming but they do generate DTC’s. Any issues with that?

Which GWM are you using? It seems that Ford GWM’s are mostly interchangeable from 2015 (or so) thru the present, except for maybe the 2021 vehicles. The GWM in the Mustang Mach-E and 2021 F-150 are different from previous years. In fact the F-150’s use the same module from 2015 thru 2020, just revised part numbers. The wiring and asbuilts are all the same, except for the test port that was deleted. I recently updated the GWM in the truck (2015 F-150 Platinum) to 2020 specs, no issues whatsoever. This was to enable Sync Profiles and PAK (Phone as Key), but found that this would rely on some other modules being replaced (hardware), which was not worth the cost to me.

Yea you get DTC’s from missing attachments or items that it is looking for on the Can Busses. It’s never effected anything I have programmed. Of course I have only done stuff with Explorer modules so I cant speak for other vehicles.

The one I am using is from a 2017 Ford Explorer Platinum. I may grab one from a 2018 Edge this weekend since they have an extension harness on them. I have noticed when looking at the AS build’s between GWM’s that there are setting differences but so far no one has posted what those settings might be.

One of my projects I am brainstorming is how to turn a CGEA 1.2 in to a 1.3 car. Specifically the Explorers.

One of my projects I am brainstorming is how to turn a CGEA 1.2 in to a 1.3 car. Specifically the Explorers.

I have noticed when looking at the AS build’s between GWM’s that there are setting differences but so far no one has posted what those settings might be.

I have not seen any kind of definition as to what the settings relate to, but some experimenting on the truck did yield some routing or permission results, as traffic could or could not pass when I changed the asbuilt. It was not very conclusive.

That would be useful. Where are you finding the GWM with harness?

Hey one thing I should mention, you can do the same thing I did with the BluePill can simulator by using these items:

There is a Russian forum that details how to hook it up here: Ford Sync 3: кастомные прошивки и видеоплеер (с. 12) - Ford Focus 3 That is where I got the CAN messages that make the APIM actually turn on from. You basically are connecting the OBD2 cable directly to the I-CAN bus with a 120OHM between the HIGH and LOW lines and playing back a “turn on” message. The downside is that you would need a separate ELM cable hooked up to the HS-CAN pins in order to do ForScan stuffs, and also that you have to keep the computer connected the whole time so it can send the “turn on” message continuously.

I just cut the Pigtail when I get them at the wrecking yard. The Edge has the GWM module mounted up to the right of the steering column. They use and extension that runs from the normal ODB port location up to the GWM. I figure I may need this at some point. I will prob grab the pigtail for it because you just never know

Is this better then the Chinese emulators? I bought one and it turns on my apim but not all functions work.

I been searching for awhile on a bench tester, I even bought a GWM, BCM and dash harness from a 17 mustang. I already have an Apim, acm and fcim.

What I’m trying to do is add it to a 14 mustang. I have done it with the Chinese emulator but like I said it’s limited functionality.

What specific functions do not work with your Chinese cable?

I converted my base mustang to the oem nav system, but it still sync 1/microsoft.

Im trying to add the ACM and APIM. I would like to run the FCIM to control my HVAC and radio. Im able to use the mustangs FCIM to control the HVAC, while the emulator came with buttons for the radio, volume up, down and eject.

I got it to work but it gives me a message “for your safety some features have been disabled while your vehicle is in motion” so I cant run android auto or car play or bluetooth just the radio. I would also have to unplug it to turn it off or else it stays on.

Update to a Sync 3 unit with 8" screen, replace the USB hub with a new one, and it will all work with some asbuilt adjustments for at least the APIM. You will need an adapter harness, available online, for the Sync 1 to 3 change. The FCIM will need to be swapped for a 2015 or 16 unit. The ACM will need some changes. This is actually a common swap on the F150’s.

Yup, the reason you are getting that is because your Chinese cable is not sending this message

If the APIM does not get any message that indicates the ignition position, gear and speed it defaults to the “car is driving” mode and locks out some settings.