Is there a compatibility issue between Sync 3.4 and the new 4G modem hardware that Ford released for vehicles with older 3G modems? I just picked up my car from the dealership and none of the FordPass features work. Ford support said the dealership did not do the install correctly, but I suspect it could be my version of Sync because my Expedition doesn’t have any of the FordPass features, like remote lock/unlock either. It did for a brief time, but I think updating Sync broke the functionality. I’m currently running Sync version 3.4.21194. Ford’s website says the latest version for my 2017 Focus is 3.0.20204. Am I correct that 3.4 → 3.0 reversion is not available due to partition differences? I’m getting PKG_03 errors when I try to install 20204.

Ford support said the dealership did not do the install correctly, but I suspect it could be my version of Sync because my Expedition doesn’t have any of the FordPass features, like remote lock/unlock either.

They are most likely correct. You are not alone.

Your APIM has been upgraded via non-Ford authorized software to Sync 3.2+. You cannot go back to Sync 3.0 due to the differences in partition layout, etc.

I had the exact same thing happen with my 2020 Fusion when I had them upgrade my modem to 4G. My Fusion had and still has 3.4.21194 and my dealership was able to fix it when I took it back. They had the AsBuilt settings wrong and when they corrected them it has worked fine ever since.

Hey Bill, did you by any chance know what the correct AsBuilt settings were for that? I have a 2019 Fusion Energi and of course there is no 754-01-02 AsBuilt to look up, but wanted to see what other successful upgrades looked like. Thanks

I think these are the latest ones Ford put in. If not, I can pull them later tonight. 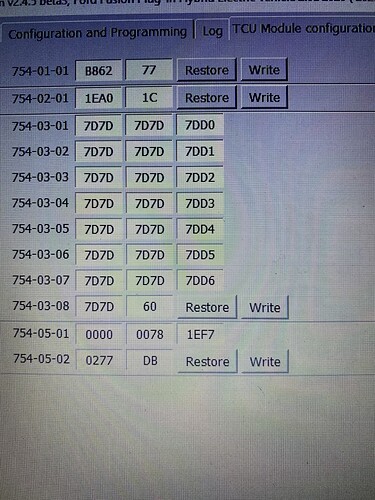 Thank you Bill, I think that did the trick. I had 00A0 in my fusion of my DIY 4G upgrade and after putting in the 754-02-01 (by accident said 01-02 before) same as yours I have fully functional Fordpass on a TCU from a 2017 Escape. This was the final thing I was looking for because I had everything but the Charging Details and Charging Logs. Once I did a master reset of Sync it all came back up after authorize.