Trying to Update to Sync 3.4

so I spent most of the day trying to get the ford sync downloader to work with no success. I kept getting an error message stating that Windows would have to force close the program because it was unresponsive. I believe I saw that someone else had this same problem.

So since the downloader wasn’t working, I went through the manual process.
Followed the instructions that were given & with the USB installed into the vehicle I began the update process and then I got this error message.

I used NA for region
Chose 3.4 19200
I currently have Navigation, so i chose i have navigation

Then downloaded & copied everything listed

Please post the contents of the autoinstall.lst and reformat.lst files.

Are you in the US?
And, Vehicle make, model, and year. Is this the stock unit that came with the car?

Autoinstall.lst is irrelevant at this point

And don’t panic this is completely recoverable once we determine where the mistake is.

In the US
2017 Ford Fusion Sport.
Stock unit that came with the car to my knowledge

Your reformat file has no app or voice listed. Give me a few minutes and I’ll respond with what you need.

The autoinstall.lst if fine, nothing needed.

You need to make sure all these files are in the SyncMyRide folder on the USB.

so i assume once i fix the issue with the reformat/syncmyride folder, all i need to do is stick the USB drive back into the car & it should start the process again?

Yes. Even if it does the reformat again, there is nothing there. It should pick up and the screen should show the backgrounds and start processing the files. It will take just short of 30 minutes. Do not remove the USB until Sync reboots, then let the system boot and process, takes a few minutes. NAV will take the longest but the rest of the system will come up pretty quick.

I’m curious how you ended up with missing lines, did my code fail?

i can see from my own testing that all seems fine 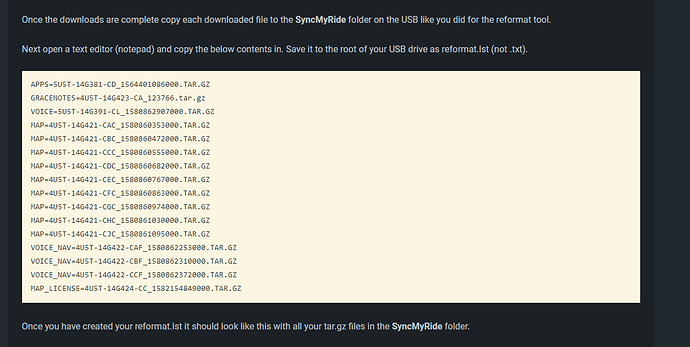 To see what was missing I also generated a new reformat file from the downloader. Worked ok.

Not sure to be honest. When I did the 1st attempt I recall there were 13 total files & 13 files on the notepad doc.

Alas the 2nd attempt worked perfectly. I actually went ahead and went with the most recent 3.4 file instead of 19200 because I don’t play music through USB so why not have the most recent version.

All of it could of been avoided if I could of gotten the sync downloader to work. Not sure why it wouldn’t work for me, but I’m kind of glad I had to do the manual method. I feel like I learned more that way.

Thanks again for the help! Much appreciated.