Hey from the Uk here

This site is doing the rounds on many Ford Focus enthusiast pages… but several questions that I cannot find answers from officially.

Thank you for any help.

Thank you, my responses:

So if I set it to keep current maps version (ford sync website says I am up to date) but you have two F9 maps versions one for September. I last updated maps back in August to F9. How do I know that your version isn’t more up to date? I imagine the update will be quicker if it is not updating maps as well?

Yes, Ford probably don’t have the newer F9 on their website yet. it will be way quicker without updating maps

1 or 2 people have posted it working but when i have asked for proof they haven’t provided any nor have they confirmed any of their AsBuilt. through the entire SYNC scene it’s known that this isn’t possible, happy to be proved wrong.
Edit APIM AsBuilt in forscan

This is my current info… so would you recommend updating to the latest maps you have put on? I already have Sync 3.0 and F9 maps so I guess my APIM is already up to date? Also do you know how to turn on auto locking at speed? 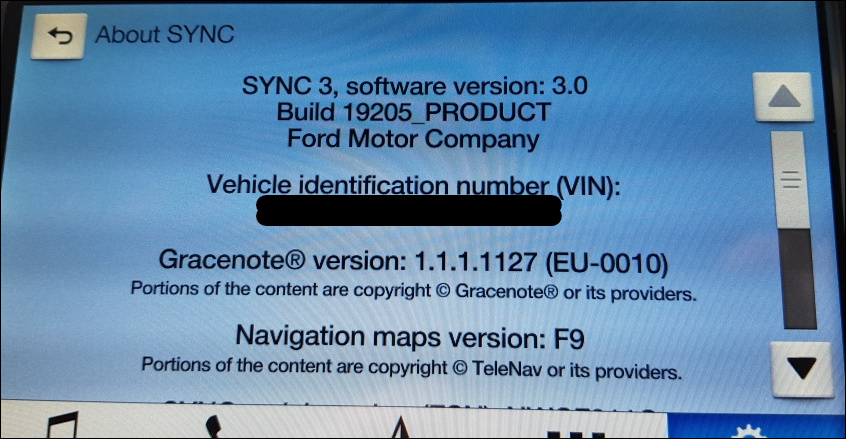 Sync 3.0 is not the latest, sync 3.0 maps are not compatible with Sync 3.4, you will have do a complete reformat to go to Sync 3.4, select the latest maps in the app and create the USB

Yes I have done that, I will run the update later. Any idea on what I need to edit in the APIM to turn the climate bit off?

Will this update which is currently running affect the sound quality? I have the sony upgrade to 10 speakers with sub in the spare wheel area. I dont want to forgo any sound quality etc

Will this update which is currently running affect the sound quality? I have the sony upgrade to 10 speakers with sub in the spare wheel area. I dont want to forgo any sound quality etc

No. This will not affect sound quality.

Loving the update excellent work put in by the team.

Was really easy to do as well I like the calm screen. Only thing I’m noticing is that I get a ford logo at shut down now instead of the ST logo which only comes on at boot up.

You can change that using Forscan.

I can’t find any option for it

Actually, the default themes for 3.4 are Ford MY20 and Lincoln MY20, as the old themes have been deprecated but still exist in the software. Inserting the value 00 at 7D0-03-01: ####-XX##-#### is effectively using Ford Classic, but in 3.4 and up it sets either Classic or Ford MY20 depending on the boot screen variant chosen. This is the logic from the program file:
“Maps to ENUM_GblVehicleBrand_Ford, ENUM_GblFordMY20, ENUM_GblAnimationThemeST”

See the As Built Database on this site:

Try APIM Module Configuration, press play choose splash sceen and change to ST.
That’s the way i did mine.

Yes it’s already set to this one.

I think @colinmcg71 said “Ford Classic” because thats what ForScan shows it as, its the same value as the new “Ford MY20”

I get it on start up but at shut down it’s ford. Not so much of an issue.

For some reason as well the calm screen when activated only works at the initial time at the next car start it has gone and not available any more but still shows enabled in APIM.

You need to change the theme on ForScan as mentioned to get shutdown and startup working.