I’ve joined your community because I completed (using the tools available here) the update of my car from sync 2 to sync 3, changing the apim and updating the asbuilt file for my car.

Everything works fine, I haven’t any problems, but I’m wondering why my new apim doesn’t show up on etis and it’s stuck on the code of the old one that I removed from my car. I saw somewhere that doing a “search for updates” on the module via Wi-Fi would have updated the code of my new apim into Ford servers, but nothing changed in my case.

The original Sync 3 APIM (from an EU Ford Kuga), that I bought to do the retrofit, had an old Sync 3 ver2.3.17109 installed, thinking that was the reason of my issue, I updated manually following your guide here to Sync 3.0.20204, but also with that version nothing changes.

Does someone have the same issue? Could someone explain me how can I update the module on etis manually, if possible?

Thanks in advance for your attention,

I could be wrong but i was under the impression only Ford Dealers can update ETIS ?

Thanks for your reply.

I was thinking that too, but in some forums/facebook groups I saw that some people were able to update automatically the APIM module code on ETIS only by connecting the new apim to wifi and checking for updates.
I think that while the apim checks for updates, pings the ford’s server and automatically updates the vin of the car with the new unit, but that’s not my case.

I had SYNC 2 in my old focus, ETIS never updated to SYNC 3

My 2015 Explorer has never updated in any of Fords systems when I added Sync 3. My understanding is that this is a Sync 4 thing where it communicates back with the Ford servers on Module and Asbuilt updates. This is a ssuming you have the correct TCU and GWM to make that happen.

I don’t know if it’s possible to post thread from other forums, but there’s a guide made by Auron (a guy that probably you know because of his works with forscan/retrofits) that mentions that: 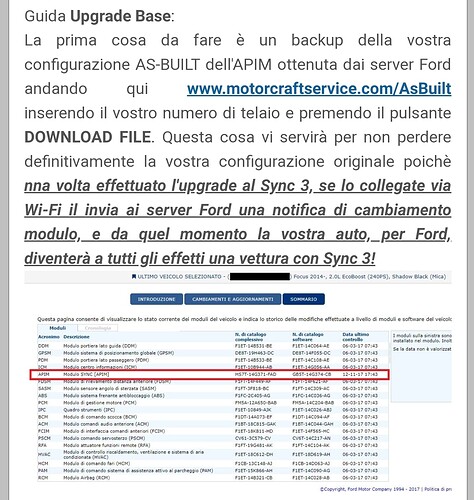 The first thing to do is a backup of your AS-BUILT APIM configuration obtained from the Ford servers by going here www.motorcraftservice.com/AsBuilt by entering your VIN and pressing the DOWNLOAD FILE button. This thing will help you not to permanently lose your original configuration because once you have upgraded to Sync 3, if you connect it via Wi-Fi, the system sends a notification of module change to the Ford servers, and from that moment on your car, for Ford, will become a car with Sync 3

So I assume that it’s possible to update it, but hearing from you guys don’t always happen

I know of him

Do you mean with an apim from the same car model?

If yes, I saw that some people didn’t have problems mounting apims from different cars and having that code updated on etis (and having updates directly from Ford too).

The only problem that I heard of is mounting an apim from a USA car to an EU model, I don’t know how, but in that case Ford rejects to update it to etis

I have performed dozens of Sync 2 to 3 and other upgrades and have never seen the Ford ETIS database for a vehicle update the hardware from OEM unless the update was performed thru Ford ETIS/IDS by an authorized repair or other action like a recall, etc. It is possible to change the hardware, firmware, and asbuilt data for repairs performed thru IDS/FDRS only. (This is true for the US, at least.)

As far as updating of the OEM asbuilt thru WIFI, this is possible and does happen. All you need is the WIFI active and Sync 3. This is also performed thru FordPass. This is not updating the hardware or firmware versions registered in ETIS, only the asbuilt information for the module AS LONG AS THE HARDWARE IS OEM, or OEM replacement. The WIFI connection can update other information, just like the APIM Interrogator does thru USB when you upload that data to Ford. However, if the hardware or data is either not designed or authorized for your vehicle it will not be reflected in the ETIS database. (This is true for the US, at least.)

Many thanks for your detailed explanation.

I don’t know how it works here in Europe (I’m a newbie in this world) but I think it could be the same here.

Btw you remembered me to give a try with fordpass, maybe It will solve my problem updating my new asbuilt with a bit of luck, since my update Is OEM

From what I can interpret from that, the Sync APIM module MAY have been changed, as the date is different from the production dates for the other modules. It could just be that the firmware was changed. This could have been a warranty replacement action, but ETIS itself would not tell you this. We know that the hardware was changed…

From motorcraft website I saw that my vin hasn’t been updated, it’s always the same it was with Sync 2

Thanks for contacting directly Auron

So the only way to do it was buying an apim from the same car model, considering that in my case I’ve a Kuga module on my c-max and it doesn’t work even if both cars share almost the same hardware