'15 Mustang with an aftermarket Sync3 install, phone calls don't work with either BT or AA

So, I’m on the latest software revision for Sync3 (3.4.22020) which I upgraded straight to from 3.0.19205. Everything works great except phone calls. When either making or receiving a call Sync will switch from phone audio (like if I’m playing music from my phone via either BT or AA) to regular radio (whatever station it was on last) and play that instead of BT audio.

Did I upgrade too far without an intermediate upgrade? Should I downgrade (and, if so, what’s the process on that?)? Did I just miss something dumb?

Did you perform a Master Reset and unpair and re-pair your phones?

Probably should have mentioned that, but I did. Also didn’t mention that my phone is a Pixel 6 Pro.

I even tried it with my work phone (a Pixel 4).

Still behaves the same. As soon as the call “starts” it flips to whatever standard radio station was last playing, whether it was AM or FM. It haven’t put a CD in the car, yet, so I don’t know if it flips to that.

Took a video of what it’s doing if that helps. 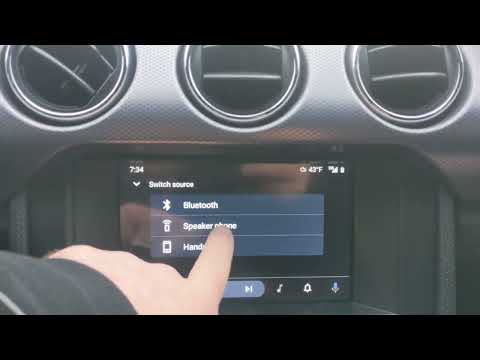 Does it work properly without using AA? Phone not connected via cable or wireless AA device.

It does the same thing plugged into AA or regular BT.

Not plugged in, just BT, does the same thing. This tells me that the phone is commanding the switch by sending invalid commands or data and Sync is defaulting to the radio or last source used other than the phone. Sync would not switch sources on it’s own unless the last device used cannot be found.

I am no expert on Android phones as I don’t own one or use them. Maybe others here can chime in on the issue if they use Android…

I’ve never had this issue before, though. Same phone has worked with BT just fine with the factory Sync systems in my '12GT that just got totaled, my wife’s '11 Edge (My Ford Touch), and both regular BT as well as AA in the rental '20 Jeep Cherokee I just had for a week and a half.

How can I tell what year the system that’s in this car came from? Maybe I can find somebody with the same year around me and see what my phone does in their car.

Oh, also, while on the call I’m able to switch Privacy Mode on and off as well as hang up the call from Sync. Switching Privacy Mode on causes the audio to come out of the phone and switching it off makes it think it switched back to Sync. So, it’s connected and commands are working. It’s just audio and microphone that aren’t being routed through Sync and that’s only during calls.

Sorry, I have ADHD so not all of my thoughts happen at once.

I stumped you guys, huh?

Some added pics just in case they help. 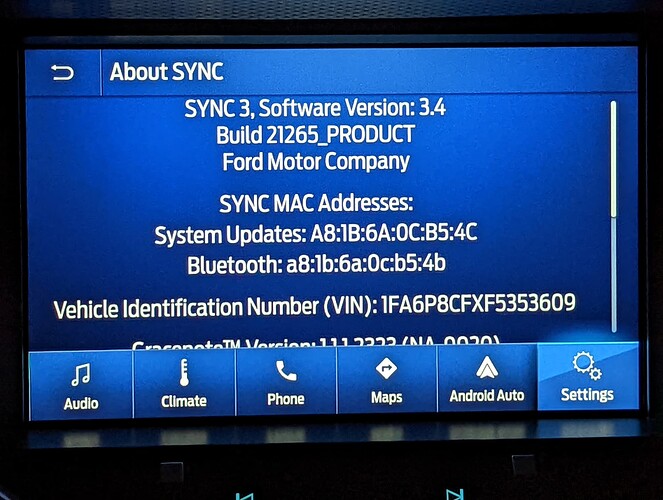 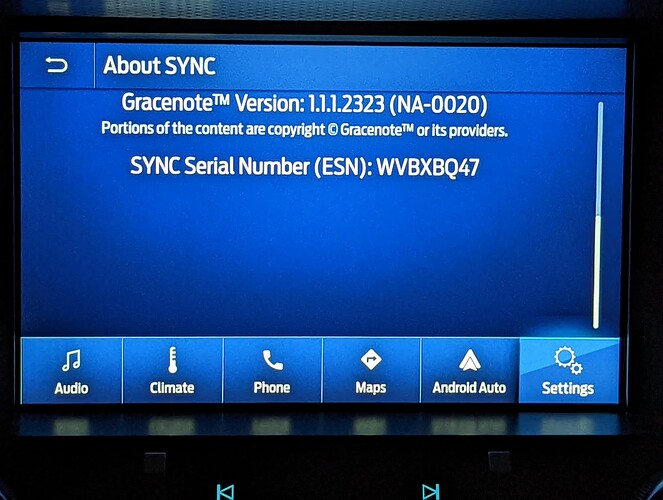 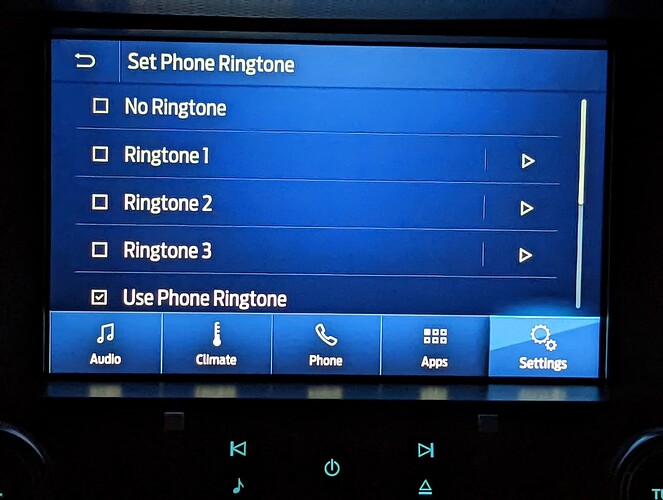 @F150chief, one thing I realized is that when I’ve done a master reset that it retains whatever radio stations it had as well as at least the setting for which ringtone is used for the phone. I was under the believe that the default for the ringtone setting was “Ringtone 1” and a bunch of people fixed their phone issues by setting it to “Use Phone Ringtone”.

Am I wrong about that default or is my master reset not actually resetting everything it should?

Radio stations are kept in the ACM so they will stay when you reset the APIM.

Part of me is tempted to do the downgrade, but I want to make sure I’m understanding that process correctly. It wipes out the device and installs 3.3, right? At that point, things should be fresh, even if I upgrade again to 3.4? Or does it just replace system files and leave everything “in-place” as we say in the IT world?

Also, is there a secret menu that I’ve not read about that’ll tell me the part numbers for everything in my car (display, APIM, etc.)? Being that this setup was installed in a '15 car by the prior owner, I don’t know what year it was sourced from and what parts I’m working with without disassembling the dash.

Sorry I had other business to attend to…

Ringtone: Use the phone ringtone.
Downgrading to Sync 3.3 will NOT change any settings with an autoinstall method. Using reformat method will clear some settings, like paired phones, etc., but will not fix or correct any user settings or Bluetooth preferences. Master Reset is the only function that will accomplish a complete wipe of user settings.
The Test Menu is accessible via the FCIM buttons: press CD Eject and FF for 8 seconds. DO NOT change logging settings. Pay no attention to the vehicle configuration settings in the APIM section. These are just default firmware settings for the asbuilt.
You can see the part number information under APIM Diagnostics.
As Bill stated above, the ACM contains the radio station data, not the APIM, as long as Personal Profiles is not turned on. (Your vehicle will not support Personal Profiles.)

Switching Privacy Mode on causes the audio to come out of the phone and switching it off makes it think it switched back to Sync.

That is exactly how it is intended.

It’s just audio and microphone that aren’t being routed through Sync and that’s only during calls.

Some F-250 vehicles have an issue with the ACM that has the same symptoms. I will check on this.

The vehicle was originally equipped with SYNC 1, not Sync 2. There is a bit of wiring difference between the two, and it is possible that the wiring was never changed in the swap.

Here is the difference with the microphone connection:

Needs to be this for Sync 3:

You need to check the rest of the wiring to make sure it is correct for Sync 3.

OK, that is quite helpful. Thanks!

So it looks like I might have to take the dash apart to look at the connectors, then, huh? Time to break out some YouTube videos. I believe I was led to you by a channel called Navi Upgrade or something like that and his videos seemed pretty complete, so I’ll scope that out for locations of stuff.

Everything else seems to be working OK, but I will check regardless.

Some of the color codes seem to be different for functions, but I imagine that’s fine as long as I make sure it’s the correct function (“circuit”) label.

There will probably be a few more scattered replies as my ADHD meds kick in for the day and things start to make sense.

Again, thanks for your help and no worries about being busy. I just sent some paperwork to my lawyer about the accident that led to me getting this car that probably should have been sent last week, but I also had my sister’s wedding to deal with on top of the car purchase.

OK, @F150chief, I think I only have to swap those two wires. I compared the pinouts for the two connectors and eliminated everything that has to do with SiriusXM since I don’t have that.

I think 38 should be OK since it’s a ground regardless of its function label and I don’t think I have the function from pin 44.

Does this make sense to you? 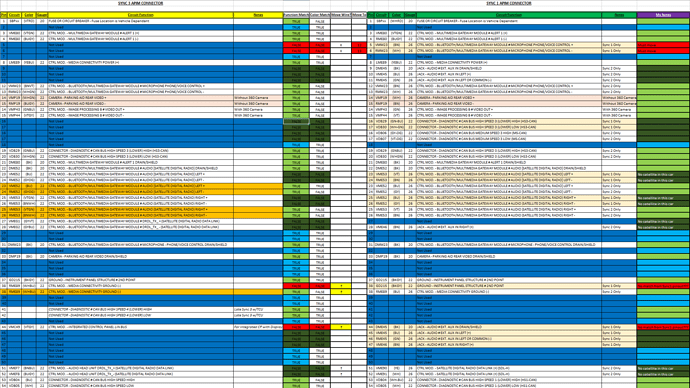 I think 38 should be OK since it’s a ground regardless of its function label and I don’t think I have the function from pin 44.

Does this make sense to you?

OK, so maybe if I can get the kids to leave me alone for a bit I’ll pull the dash off and check the connector.

This might also solve my backup cam intermittently either going black or looking like scrambled… Uh… Adult channels back in the days of analog cable.

Ford has looked at it prior to my owning the car, but it’s worth looking at those wires on the APIM connedctor while I’m in there.

Adult channels back in the days of analog cable

If you are having camera issues then this is a good place to check, they are all in the same connector. Some of the conversion kits (China) are really cheap and the connector pins bend and expand easily. Look for pins that don’t seat well and may be tarnished or blackish.

Thanks for all the help!