I read through the docs and how to’s.
I have my [email protected] adapter plugged in and talking to FORScan.
Whats the next step?

Do a setup scan and save the profile. Look to see if you can see the APIM module in the ASBUILT section. Save the asbuilt as it is now.
Look for the Theme setting and set it to Ford Classic if it is not already set.

Whats next?
I super appreciate your help.

OK, I wanted to check if it was a simple theme issue first. It’s not…

So fine with FORScan, this is good. Let’s try to load the entire OEM APIM As Built for the module.

It works or not…but this will rule out asbuilt corruption as an issue.

I was able to send the OEM APIM AsBuilt without issue, unfortunately that did not work to revive it. To reboot the unit I turned the car off, waited for the screen to turn off. Restarted the car. Still black. Held the “Seek Up” and stero power button for 10 sec until the screen turned off. Still no change.

No need to reply back today. Its a holiday and you have already gone above and beyond.

This is really acting as if the screen was replaced recently and a MY20 screen was installed. But the APIM is original as far as you know.

Try running the APIM Interrogator Utility to see if you can get a log out of the APIM about it’s status. It might not run at all, but nothing to lose. You will not be able to see the update running but it usually takes about 2 minutes if that. So if you make the Interrogator Utility usb and insert it in the vehicle, just wait about 3-5 minutes and then remove it. If it didn’t finish by then it probably will not run. The Interrogator Utility can be found in the Syn3 Updater Troubleshooting tab.

If anyone else has ideas about what the issue could be, please chime in…Just pinging for suggestions.
@bill32399 @Louage @SaNdMaN @avdonr @CyanLabs

I did notice that the log states a Windows 11 machine was used, but I think this wouldn’t make any difference. Just wanted to point that out.

I’ve been following this since I have had 3 Flex. I agree with F150chief though it does act exactly like the my20 screen issue.

At this point though, as your probably getting desperate, I would try maybe using a lower version of the Sync software and see if that works. The previous version 2.3 was a really early one it seems so I would try the 3.3 version. I am guessing you have a really early APIM that could be one of the more temperamental ones. Also I think you have the early USB ports so that “could” also be an issue. Lots of work here for sure to find what this one might be.

I made the Interrogater Utility. After letting it sit for almost 15min, i removed the USB. There doesnt seem to be an XML log file on the USB.

The previous version 2.3 was a really early one it seems so I would try the 3.3 version. I am guessing you have a really early APIM that could be one of the more temperamental ones. Also I think you have the early USB ports so that “could” also be an issue.

I will try this and let you know if anything happens.

Unfortunately, nothing happened when I tried a lower version

This is all I got left.

Some 2016-2021 ford or lincoln vehicles equipped with sync 3 or sync 4 may exhibit a blank screen or other various sync symptoms only when the vehicle is in transport mode. This is considered normal due to the power saving features enabled

It might be stuck in Reformat mode, with just the screen blank, who knows…but try this. Use the reformat.lst file attached.

Followed the steps exactly. Been sitting now for almost 30min with no change. The blinky activity led on the USB isn’t even blinking.

Sorry for the late response.

I’ve read the thread entirely, and this really looks like a MY20 screen issue.

Is it possible for you to remove the unit and gain access to the stickers on it?.

There’s really only one way of confirming if a screen is MY20 or not, and it’s by looking at the sticker.

Let me look on how to do that, and ill get back to you.
What if it is a MY20? Am I really screwed? Will I have to purchase a new unit?

Short answer would be yes, you would need a new unit.

Another option would be to temporarily install a not-MY20 screen to complete the process, then putting back the MY20 screen once the unit is back operational.

But to be honest, the manufacture date being that old, does not point to MY20…

If you can take pictures, it would be best as well.

pictures of the labels on the screen or the APIM? 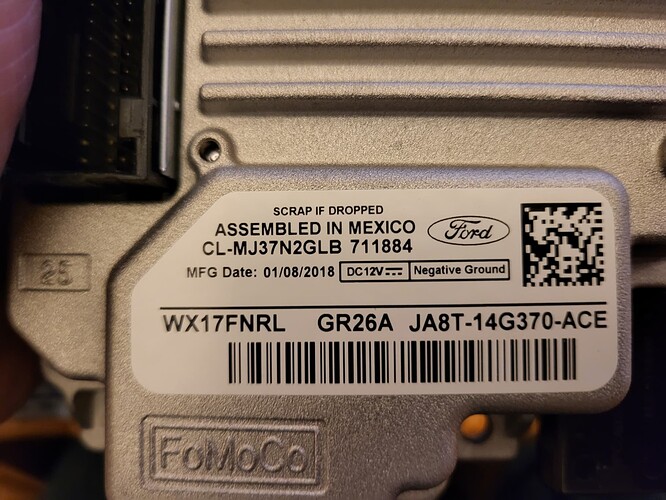 Well… That is not a MY20 screen
Your APIM is J series so I think it’s MY18, and the screen is older since it’s G series.

I do not really what else to say, since these do not seem to be MY20 components.

Only think I could think of is some kind of HW fault, but it’s a long shot really.

By the say, is the unit still recognized via Forscan?.

If you: didn’t have a particular theme nor have a MY20 component, I’m a bit lost as to why the screen si now black since it should had worked without issues.

Lets see what the others has to say.

Yes. FORScan can still access it. Ill put the unit back in the car tomorrow, as its dark outside now.