APIM not working after firmware update

Against my better judgement I decided to try and update the firmware for my APIM using Forescan. After doing so it stopped working and the firmware will not load. I have a 2016 Ford Escape Titanium with the most current Sync3 version updated that was working before updating the APIM. Any help or suggestions would be greatful.
log.txt (4.8 KB)

From reading the logfile, the issue is likely the Strategy GB5T-14G374-AF file. The original file from Ford is known to be corrupted. This will affect the loading of the Calibration GB5T-14G375-CA file.

Have you read thru this and followed the instructions?
APIM Firmware Flash Rescue - Ford / Information - CyanLabs Official Community

Also, this will tell you the files needed for the level of firmware you want to go to.
APIM Firmware Production Releases - Ford / Information - CyanLabs Official Community

From the logfile, I’m going to assume that the original files for the firmware were these or close to it.

This would tell me this is likely a G-Series APIM from a 2016 vehicle, which would be an early production APIM. These series are especially temperamental but can be upgraded. I would recommend only upgrading this unit to this level as the hardware will not support the later versions features anyways.

Thank you for the help. I will give this a try as soon as I can. I will let you know how it comes out. Might be a day or so before I can.

Hey, just wanted to let you know that I’ve changed the thread’s title, since “update” for most users will be a Sync3 update.

To avoid that kind of confusion, I’ve added the “firmware” part to it.

I messed up and did not download the original files before doing the update so I do not have the files to revert back to. 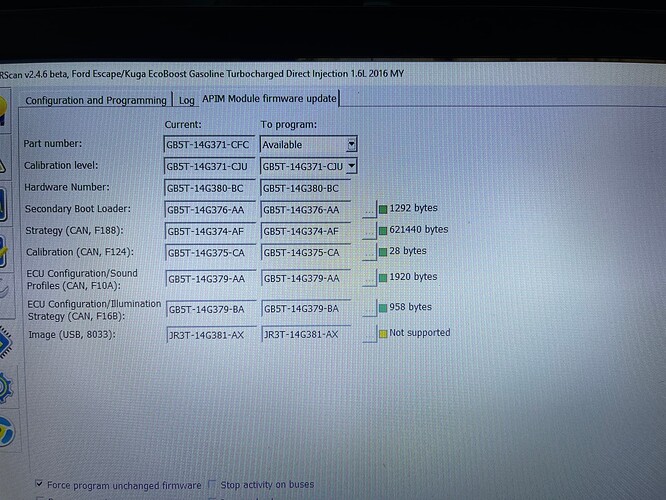 It was “bricked” before…Now reload the entire APIM asbuilt using FORScan and reset the APIM.
Your pic must be the before?

Look in the Information section for the tutorials…

I have read through both sections and have 1 quick question. When its says flash order does that mean I only do one line at a time or just do all of it at once? I am guessing from the article some are done with the igntion on and some with it off?

For NA APIM’s do them all at once.

When I go into the as built section it will not load. Says something like operation failed after like 3 seconds and will not bring up the table.

Which firmware files are you trying to load?
The pic you posted shows the original files.
All files are Normally done with the ignition on.
With the firmware files having issues, the asbuilt can probably not be accessed.

Guess I posted the wrong one earlier.

After several tries guess I will just take this to a dealership and let them fix it. Nothing I have tried has worked. Thanks for all the help you have given me. Just not sure what to do at this point.

Just had to get order a new APIM through Ford since my last one got bricked. Thankfully my warranty is covering it. My question is where is the Sync 3 software stored when it’s updated? Will I be given a different Sync 3 version with the new APIM or will it just restored what I had?

Its stored in the APIM

You will most likely be getting a 2020+ APIM so you CANNOT reformat it. If you do you will brick it. The SYNC software is stored on the APIM.

Hey, I’ve merged your threads since they were directly related, and the latest is the solution to your issue (replacing the APIM), thus I’m flagging the thread as solved.

It will be kept open for 14 days after the last activity, which I think it’s enough time for you to get the new unit. After that, it will auto-closed due to inactivity.

Thank you to everybody for the information. Looking forward to getting my system backup and running.