Not sure if this is new but I can’t find any other reference on the site?

To keep this brief I updated my edge to 3.4x with the latest available maps using cyanlabs updater.

Everything worked fine and completed but now the cd drive won’t feed cd’s and the eject button says no disc.

It’s not a huge issue as I rarely use CD’s but if there is a fix for this it would be a huge help.

Questions:
A) Are you 100% sure it worked right before the upgrade?
B) Have you master reset?

About question A, you would not be the first to try using the CD player to find it does not work regardless of Sync3 version…

Issue does not seem related, to be honest.
CD loading is mechanical.

I can’t say i have ever tried to use my CD player since upgrading to 3.4 (in my old car, the fiesta mk8 doesn’t have one) however i would be very suprised if you are the first person out of the thousands of people to mention it.

It’s an odd one, it did work prior as I was listening to a Kevin bloody williams cd which you can’t get anymore, I came to put it into the drive after the update finished and it didn’t try to take the disc or even pull it to feed?

I hit eject and it came up no disc but hasn’t worked since?

And yes I have master reset, as I said everything else works 100% the upgrade, gps the works all except for the CD player which is now none responsive?

Try disconnecting the battery for about 20 minutes, and try again.

If it still does not work, complete all the missing information from your original post:

@Jon
Also run the APIM Interrogator in the Syn3 Updater and post the results. Redact your VIN in the file.

Do you have FORScan and an OBD adapter?

Does any one with SYNC 3.4 actively use the CD Player? wondering if it’s just literally never been noticed till now.

Its a distinct possibility? i rarely use it but noticed as it happens i was listening to a CD not available on spotify. I did wonder about if this is because some newer fords dont seem to have them anymore infavour of usb?

Does any one with SYNC 3.4 actively use the CD Player?

I will ask on local forums and report back.

I can check my C-Max later. I’ve honestly never used my CD player either at least not in a long while. I know it worked with Sync 2/MFT and this would be a 2-to-3 upgrade here.

Does any one with SYNC 3.4 actively use the CD Player? wondering if it’s just literally never been noticed till now.

Looks good on my '13 C-Max here. Burned a couple test CD-R’s. One an Audio cd with CD-TEXT and the other a plain old MP3 CD. I’ve also attached my APIM Asbuilt for reference.

As an FYI: This was an original Sync 2/MyFord Touch system with the Sony audio system. Upgraded to Sync 3, kept the factory ACM. 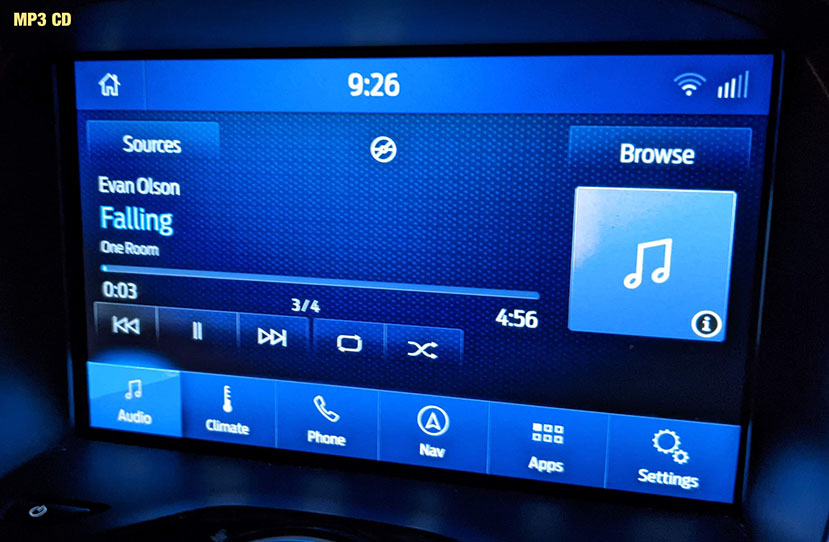 Thanks for confirming, was starting to think everyone was having no CD player working and it’s taken 2 years to find this out… seems this is not the case so therefore i can only assume it’s a HW issue with the OP

I used mine last year (actually Christmas 2020) when I drove to Daytona. I figured what the hell and the wife had some Michael Bublé’ CD’s. That was really the first time I had ever used it other than testing after upgrading to Sync 3 some years ago.

Ok so disconnected battery for 25 mins re connected still no joy, I have just read that Ford have removed the CD player from 2018+ edges I wonder if this is the issue? Or that as this was not firmware for my year sync the update no longer supports CD players?

The APIM Interrogator Utility would answer all the questions…

As people have confirmed it works on sync 3.4 then the issue is likely none of these things.

For what’s worth, even if I do not have a lot of feedback, I’ve been told this also works for Focus here in Argentina, which originally went from Stock Sync3 2.x / 3.0 to 3.4.
So yes, even if it’s related to the upgrade (which I’m not sure, really), it’s very particular.

Also, have you performed some changes to the car before?, some as-built change?.

I’m away from home at the moment , my intention was to use my laptop to setup the usb but I don’t have a flash drive with me