Since upgrading to Ford Sync 3.4 which seems to work very well, I notice that when the climate control is in dual mode, the temperature controls and display are backwards, so right hand driver side cotrol and display is the left hand passenger side and vice versa.

is there a right hand drive setting to correct this somewhere, even via FordScan?

Unfortunately not. You likely didn’t have climate control before hand or only had it as single mode.

I also upgraded sync 3 v3.0 to v 3.4 yesterday and now have the same issue with temperature control which was working correctly on sync3 version 3.0.
2017 Ford Focus Titanium .

Hmm strange, everyone in the UK that had temperature control on the screen afaik still has it the correct way around.

Same for me too, Updated from 3.0 to 3.4 and my UK 2015 Focus Titanium X with dual climate is also backwards . In Forscan it’s still showing as right hand drive, so also looking for a solution.

It was my understanding that no one in the UK had climate control the right way around on a. Focus… Seems that’s not the case… Can you pm me your vin I will do some research

Guys, you should really NOT post your VIN numbers on the internet…

How do we PM you it says your profile is private.

Good question, others have managed?

The vin isn’t useful anyway as will only list your asbuilt from factory.

If you need to post your current asbuilt for your apim, preferably screenshot forscan.

As an aside, this is a hardware issue that isn’t correctable. I have the same issue in mine.

Guys this issue with adding climate to sync 3 be it using this app or generally adding it to a uk car via forscan is hardware based not software related , if u add it with forscan its back to front on the dual zone part of it .
Ive not upgraed yet but looking at some of the screens posted it functions correctly so long as u adjust each side together and do not the dual zone feature.
Voice and dual zone climate works fine on sync 2 but for some dumbass reason ( due to costs) ford did not implement it on sync 3 .
But does work on all EU & USA versions of sync 3

I’m not sure this is true, i believed the same but others are telling me that they have UK focus’s with the climate control the right way around on the software, i was under the impression it wasn’t possible but i think there is more to research here.

But does work on all EU & USA versions of sync 3

My experience & understanding matches Simons, I havent seen a way to get it set correctly on my Focus (UK) either

yeah and i agree but others don’t seem to… weird…

Theres no one in the uk atm that iam aware off thats got this working on “dual zone” and thats the issue , apparantly its the lead
But like i said workws fine on sync 2

these guys seem to suggest otherwise?

I also upgraded sync 3 v3.0 to v 3.4 yesterday and now have the same issue with temperature control which was working correctly on sync3 version 3.0.
2017 Ford Focus Titanium .

Same for me too, Updated from 3.0 to 3.4 and my UK 2015 Focus Titanium X with dual climate is also backwards . In Forscan it’s still showing as right hand drive, so also looking for a solution.

Also FWIW me and Louage are also UK based

I think your reading there replies wrong its never been available on sync 3 now theyve upgraded to 3.4 its now an issue .
But climate will work on both 3.0 & 3.4 if u just uses 1 temperature

Appreciate I’m bringing back a post from over 2 months ago, but I’ve just upgraded mine from 2.2 to 3.4 - Also having this issue, obviously not a major issue, but has there been any progress on this? Also noticed that when using Auto Android the buttons are on the opposite sides, as in the home button is on the left. - Again not a massive issue.

Ive upgraded mine as per adam raineys video , on adams video at tje end he adjusts the temp via evac unit and it appears on the sync screen .
Just hooked mine to forscan and adjusted 7D0 -01-01 7th number from a 9 to a B and it does sweet f.a so some more investigation is needed .
As far as the climate the right way around , its a hardware issue not software fixable 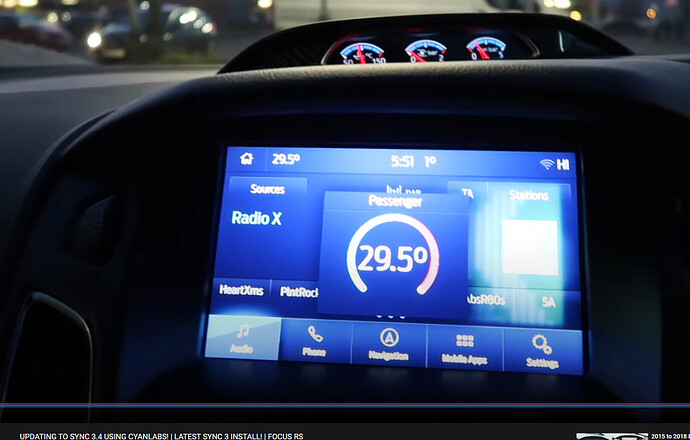 This is controlled via the repeater option