I have added the updated Gracenotes with this package also
(NOTE, Gracenotes for EU is not updated as we were already updated)

ANY COMMENT POSTED NOT DIRECTLY RELATING TO FEEDBACK AND/OR ISSUES FOR SYNC 3.4.20351 WILL BE SPLIT TO A SEPARATE TOPIC! PLEASE CREATE A NEW THREAD IF YOUR ISSUE IS NOT SPECIFIC TO THIS TOPIC!

Changes still being reported by users

Is this an official version? Does anyone know of anything new? Does this fix the Android Auto Google maps navigation issues where there is no indication of where you are driving.

Every version is official, it’s just not released yet (if ever)

I’ll hold off on updating until others have done so, but a new Gracenotes version is great to see.

Well this version does seem to have faster built-in nav and CarPlay connects almost instantly for me now. Looks like they are working on nav related stuff.

Every version is official, it’s just not released yet (if ever)

What do you mean? Sorry being thick.

All the files come from Ford’s servers and are signed by Ford; they are Ford’s files. Some they release (production builds), some they do not (betas or RCs (release candidates)). If they do release, they wait a lot longer after the files are found.

Any bugs? Planning on installing it on my 2020 Transit Connect with nav.

It’s been available for a hour or so, nothing has been found yet but that doesn’t mean there aren’t bugs

Thanks you, I’ll prepare the update for myself.

All seems good. The only difference I can see is that the modem serial number is also present in the about sync menu along with all the mac addresses and sync serial. Everything else seems to work as expected.

This is before 20315. It still shows the serial number with the mac addresses and the sync serial. 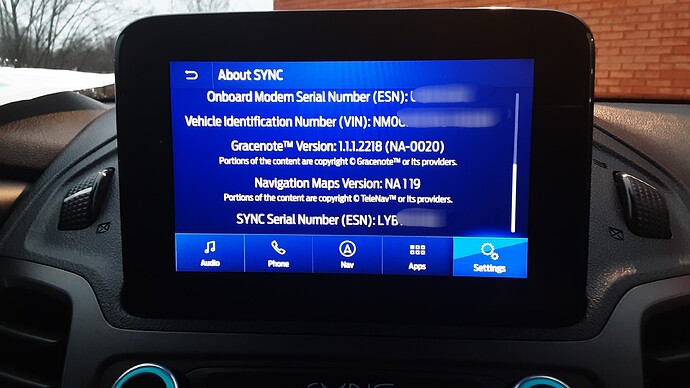 I think the optimization for the nav is preparation for the next map update, or else, it’ll be slow because of the extra load of data.

I think so too. I’ve noticed the built-in nav is faster in this build (calculated routes faster, etc), as well as CarPlay loading up almost instantly when I connect my phone. Here’s hoping for a new maps release soon.

I didn’t install the updated Gracenotes, not on purpose but because I didn’t realize they too were updated. I’m assuming I can just install the gracenotes by itself?

Yes, thats right. Its what i did when i installed the 20282 version early then the gracenotes came with the ford released version for all.