I have a TCU with KT1T firmware, I hooked it to my 2017 Fusion HS3 bus, it can be found by Forscan, but Sync 3 can’t get ESN. Looks like the firmware in TCU need to be downgrade to JL3T so that Sync can talk to it, where can I get the JL3T firmware? The link to Ford site need login and seems no way to register.

Odd that it see’s it. I thought the K series TCU used HS4 which the Fusion does not have. You can down grade it to work on HS3 like F150Chief will probably explain more by using the J series Firmware.

Did you have a TCU before the K series?

Guessing you did turn on the TCU in the APIM.

If the TCU has JL3T or JX4T firmware it will operate at HS3.

Odd that it see’s it. I thought the K series TCU used HS4 which the Fusion does not have. You can down grade it to work on HS3 like F150Chief will probably explain more by using the J series Firmware.

Did you have a TCU before the K series?

Guessing you did turn on the TCU in the APIM.

You’re correct that Fusion doesn’t have HS4, but looks like Forscan can talk to TCU through MS mode, that may explain why APIM can’t see it.

I don’t have J series TCU, and yes I have enabled TCU in APIM, but the modem ESN is always blank.

If the TCU has JL3T or JX4T firmware it will operate at HS3.

Thanks your reply, that gives me hope that this K series TCU should work with firmware downgrade to J series, do you know where can I get the JL3T or JX4T firmware?

You might want to check this article FordPass and Fusion Energi, 4G EUR TCU
It contains all the needed files to downgrade K-series modems to J-series. I did it myself and everything went smoothly.

Just an update, after downgrade firmware to JL3T, APIM is able to see TCU, the ESN shows up, and the TCU status can change from “Factory Mode” to “Wait for Authorize”, one day later “Activate Vehicle” button shows up on my Fordpass, however, when I click it, it always says “Activation is currently unavailable”, any idea why it doesn’t let me go through?

Sometimes this is due to the app just getting stuck at a point in the activation process, or several attempts were made to activate the vehicle, causing a jam in the process.

DO NOT try to activate the vehicle more than once.

If the above does not work, then go thru the activation process in this doc starting with changing the TCU back to factory.
APIM & TCU Files and Programming 20220108.pdf (511.8 KB)

Got it, his instruction really helps! looks like the firmware for TCU is good, but I don’t quite understand the firmware of APIM, the instruction says the APIM firmware version should be the 3.2/3.3 APIM Navigation Unit Firmware, is it Sync 3 software version? mine is 3.0 currently.

Screenshot below is the firmware of my APIM, the instruction says the minimal Strategy and Calibration is 1U5T, but mine is GB5T, is it good or not? 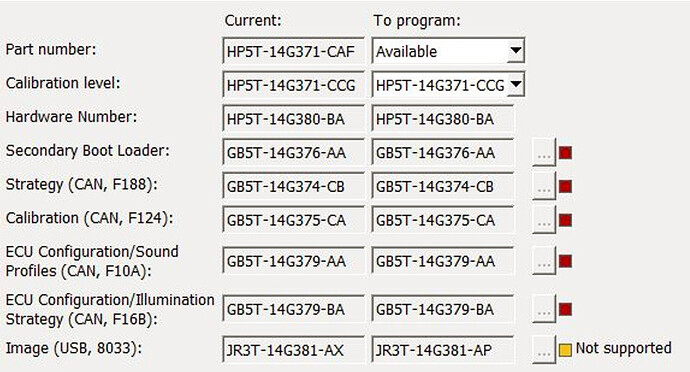 the instruction says the APIM firmware version should be the 3.2/3.3 APIM Navigation Unit Firmware, is it Sync 3 software version? mine is 3.0 currently.

If you are not interested in the Hotspot, this is really option. Although, that firmware is pretty old. Since you already mastered the TCU, which is a hard one actually, tackling the APIM is not that bad. You have very early firmware on the APIM, which will not show any info about the TCU, other than the TCU serial number. The firmware requirement for the TCU addition is really only for the Hotspot but will help with other things in general. You can stay at the current firmware, if you choose.

Thanks your always prompt response! can you share the APIM firmware with me (the 3.2/3/3 if that works for my APIM hardware)? I’m going to upgrade APIM after activate Fordpass.

Not sure if this has been mentioned but if you connected the antenna bought from Amazon or left the 2nd antenna port open, you may have some DTC error codes from TCU, they may indicate the primary and 2nd antenna open circuit, it won’t impact anything I guess because the antenna is connected actually. To get rid of these codes you will need add a 10K ohm pull down resistor on the antenna input wire. I figured it out by tearing down a shark fin antenna, it has a 10K resistor right after antenna connector, and if you use a multimeter to measure the voltage on TCU antenna input, you will find it has 1.8V DC on it, so by pulling this voltage down a little bit (~1.2V), the CPU in TCU will consider the antenna has been connected. I added a 10K resistor on both antenna ports, and the error codes in DTC are gone, it’s clean now.

If you did this with a quality narrow band open receiver antenna it would not work. To negate the affect a bit, connect the resistors where the feed line attaches to the antenna itself.

However, all is well, so success.

Good point, I think it depends on the characteristic of the resistor you’re using when it is working at RF frequency (up to 3GHz), if you’re using a small (0402 or 0603) SMT 10K resistor, I’m pretty sure it will not impact antenna at all because the resistor will behave consistently as as a pure resistor, meaning no inductance or capacitance characteristic at RF frequency, and given the RF impedance of antenna and cable is 50 ohm typically, the impact of a 10K pure resistor should be negligible.

I used to work as a RF engineer, and did impedance matching work for mobile phone RF transceiver and PA, at that time the mobile phone antenna are external and we often add a shunt inductor to protect PA from ESD damage, so I don’t see any risk to adding a small 10K resistor on RF line.

As I said in the post, there is a 1.8V DC on TCU antenna port, and if you short it to ground, the current is only 0.3mA, so I believe it is for antenna attach detection purpose, i.e. there should be a pull down resistor in the Ford factory antenna (shark fin or PIFA), otherwise there is no way for TCU to detect antenna attached or not.

Agree. There is no harm in this case with these antennas, and if there is a frequency shift it certainly will not be much, especially using the SMT type resistors vs the carbon or mica series. So the shark fin must be an externally terminated antenna if they are using a resistor. This means of course that the receiver input is high impedance, or not terminated. At least that is what it appears to be…

Finally after few days waiting, my car is activated, and I can remote access my car through Fordpass now, big Thanks You to people who helped me here!

One more question, my Sync is still 3.0 right now, I plan to upgrade to 3.4 with latest maps, do I need reactivate after upgrade?

Yes, but it should be nearly instant. It’s really the first time that takes forever sometimes.

Not sure if I can ask here, but after upgrade to Sync 3.4, the Sirius XM traffic information is no longer show up, it works normally before upgrade, did I missed something?

Sometimes it will take a day or so for them to populate back.