I am a little lost…I Installed a KS7T-14G229-AH TCU in my MKZ. The map location is working however all the other functions are blank in the Lincoln mobile App. I have read through many similar posts and I I think need to correct my as-built data.Additionally How do I downgrade the TCU firmware in Forscan? Thanks!

You had the H series TCU in your vehicle and swapped the K series in. You could leave the H-series and have the 4G connection. The firmware in the H-series is the latest (or close).

This unit will not talk to your vehicle as is. It will need a firmware downgrade and asbuilt will need to be modified for you vehicle. What is the issue with leaving the original H-series unit?

@F150Chief why do you say he had an H series TCU in his vehicle? I don’t see that info in his post anywhere.

It may be (and probably is) true that 2017 MKZs with a regular ICE powertrain came with H FordPass-capable TCUs.

So this person probably picked up a K TCU thinking that any 4G modem would work properly, when unfortunately that is not the case. However, it’s not as dire for the regular Hybrids (versus the EV-specific features needed in the Energis/Focus Electric).

I had a K TCU working somewhat in my 2017 C-Max Energi. It had to be downgraded to the J firmware, which requires a high-quality OBD cable (e.g. OBDLink EX) a battery charger for your car’s 12V battery, and plenty of time and expertise with Forscan. After all that, only certain functions worked properly in FordPass. In addition to the EV-related stuff being broken, I don’t think Remote Start worked properly either. Remote Lock/Unlock did work, as did the location, odometer readings and oil life.

Ranking OP’s options (assuming they are in North America) would be:

The reason why the K series TCU won’t work right is because with the stock calibration it uses HS4. The cars it’s being put in don’t have HS4 and use HS3 or ICAN. By down grading the calibration to the J series one you are telling it to use HS3/ICAN so it will work. If you don’t do this than location is all you will get.

@F150Chief knows what TCU’s come in what models and years. For that matter a 2020 Ford Fusion Energi only came with a 3G also like many newer Ford/Lincoln models did. There is a TSB about this in Oasis. Owners were also sent letters about upgrading them. Dealers will only put a J series in because the cars don’t have HS4 and the GWM modules in them won’t support HS4. I would guess when they move to 5G there will not be an upgrade option for CGEA 1.3 and below vehicles.

Thanks for the info!
I never had a H series TCU in the car I just mistakenly got this K series…
Unfortunately the car is not covered under 21B09 CSP. It looks like I need to get a H-series TCU -

Are these H-series TCUs hard to come by even from the dealership?

why do you say he had an H series TCU in his vehicle? I don’t see that info in his post anywhere.

It is in the factory asbuilt for the vehicle VIN.
3LN6L5MU5HRxxxxxxx.ab (40.9 KB)

Interesting. However, given that 2014-2017 MKZ Hybrids show as eligible for the CSP doesn’t that indicate that the asbuilt is wrong? Especially considering OP says there was no H TCU present previously?

I don’t think any of the 2014-2017 MKZs came equipped with a 4G TCU. AFAIK they were all 3G TCUs using the MyLincolnMobile app/platform. Let me know if I’m mistaken about this.

However, given that 2014-2017 MKZ Hybrids show as eligible for the CSP doesn’t that indicate that the asbuilt is wrong? Especially considering OP says there was no H TCU present previously?

The asbuilt is correct. It is the original asbuilt document for the vehicle.

They did not. They are all eligible for 4G replacement based on the date of manufacture and the program expiration. See attached. 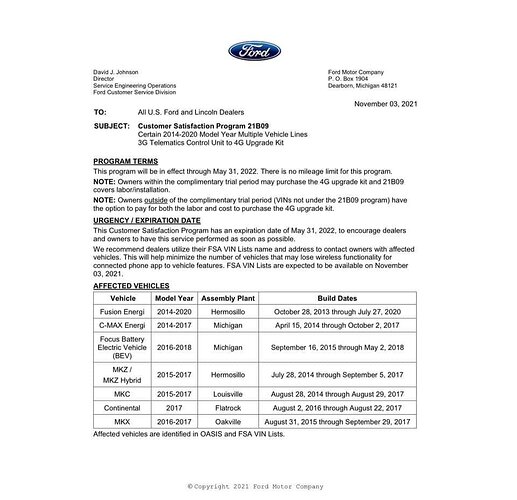 OK, well in your first post in this thread you said OP “had the H series TCU in your vehicle” and “You could leave the H-series and have the 4G connection”

Not trying to get into an argument. Just want OP (and others who will find this thread via a search in the future) to have accurate info.

Would this H-series work it’s a -UF not sure what the difference is. 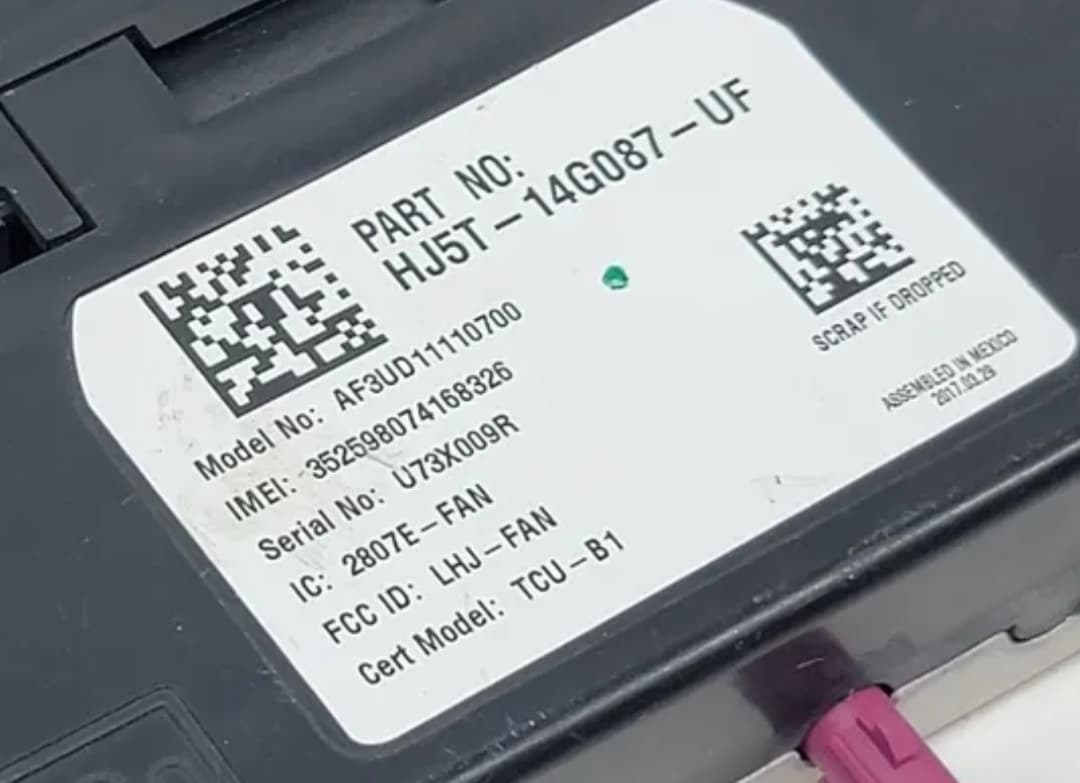 Yep, will work fine. You can upgrade the firmware to the later ones that were designed to accommodate the old 3G/MFM/MLM cars.

Edit: Assuming you are in North America. It will not work elsewhere in the world.

Both statements are true based on the OEM asbuilt. However, I did not know the program ended in early 2022, so he couldn’t get it replaced by Ford/Lincoln unless he paid for the new unit.

It only paid for Labor anyways. You still had to buy the $300 TCU. I know as I did this.

I have a H tcu laying around if your still looking. I upgraded mine to a J series so i have no use for it, but youll have to reauthorize it @Registerz3ser

I’m afraid there is no way that all three of those statements can be true.

Also, the 21B09 CSP expiration date was extended, as I mentioned in my first post in this thread. I just checked the updated dealer letter, and the new expiration date is March 31, 2023

I will use the Fusion as an Example. The ICE Fusions all came with 4G TCU’s. For some reason they used 3G TCUs in all the Energi Fusions.

So to say all Fusion’s had 4G TCU’s would be wrong.

Also to say all Fusion used 3G TCU’s would also be wrong.

You’re saying OP’s car came with a 4G TCU according to the asbuilt.

Yep, see the data in the asbuilt file attached in the thread above.
EDIT: Correction, The vehicle came with an H-series TCU according to the asbuilt, not determined if it was a 3 or 4 G unit.

Then you said that the asbuilt is never wrong

No, I said the asbuilt was correct for this vehicle.

Correct, they did not. See the attached doc.

I did not know the program was extended, that’s good info, thanks. So he can get it replaced.

Yes but @F150Chief says he looked up the OP’s actual VIN.

Yep. The ab doc is attached up the thread…