Hello! This is not a major issue, just throwing this out to see if anyone else had this problem and a fix for it. I just updated to 20196 from 19274, primarily because of the new RDS layout/display. What really drew me into it was the way you have the album art in clear view, with it also blown up and faded behind it, similar to how Spotify is in Android Auto (sorry, I don’t know the technical term for it). However, mine doesn’t have the album art in the background as well. Here’s a photo of what I was hoping to see and what it actually looks like on my system: 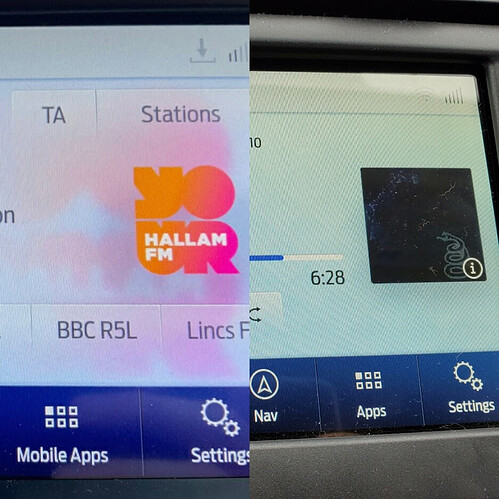 Has anyone experienced this and have a fix for it? Like I said, it’s not a major deal as everything else is working perfectly fine, just curious. Thanks!

Since you have a 2016 Fusion, I am not sure if this is possible. The hardware may not support this. Read thru this thread, as this is a similar feature that requires newer hardware also.

I was thinking it may be my APIM or ACM, but wasn’t 100% sure. I have a Sync 3 system out of a 2017 Expedition, but I just threw in the system without a new ACM, nor do I feel comfortable trying to update the APIM firmware.

I think the consensus on the “cover flow” (station logos, etc) requires a 2020 ACM for support. I don’t think this is what xlevix10 is referring to and to be honest, I can’t tell from the image posted. I see an FM station logo on the left and that’s pretty hit or miss here in the US. I thought it only worked for HD radio stations (??). On the right, I see Metallica’s Black album cover but am not sure what it’s being played with. I don’t see the “faded” album art in the background… Maybe it’s my eyes or my monitor though. I do see something blurred in the background of the image on the left but it could be reflections on the screen or something else.

The image on the left is a UK based radio station (DAB or FM), not album art. Image on the right is album art, and you are correct there is no shadowing on the album art.

I’ve actually deeply looked into this, and it’s directly related to the “country code” portion of asbuilt programming. I had mine set to USA since that’s where I’m located and it was a solid background. I set it back to what it was (a foreign country) and the nice faded album art background effect came back.

Interesting ! Why in the world would Ford restrict this to certain countries ? Are there any side-effects of using the “wrong” country code ?

Not as far as I’ve noticed, aside from my built in nav showing European style speed limit signs (red/white circle) instead of rectangular white American ones.

The APIM database here says it will impact 911 assist (and Sirius Travel link but I don’t care about that). I do presume you chose an English-speaking country like England, Ireland, etc just to be sure it didn’t change the language too ?

You are right, the cover flow isn’t the exact thing I was looking for. I used the picture on the left because it better showed what I was trying to achieve. There was another picture with actual album art, but it wasn’t as clear as the station logo image.

Your eyes don’t deceive you, there’s nothing faded behind it. The picture is a little too high-res for its own good and makes it look like there may be slight shadowing, but sadly there isn’t.

That’s interesting, I’m not sure why they would restrict that to other countries and not in the USA, where they’re based. That’s a bummer though, I’ve found Ford to be pretty lax about stuff and allow you to do basically anything you want to the car.

I have nav built into mine, so I’ll just stick with the lesser-appealing display then. Appreciate the info!

I’m sure it’s possible to have a NA region code set so your speed limit signs are correct…and still have the fancy background…only the 1 region code is listed as causing 911 assist to not function properly so I don’t think that would be an issue, really.

What country code did you choose ?

Probably from NHSTA distraction rules. That would make sense. Like how some regions like NA lock nav input while moving. You can use a wrong country, but you can break things like voice commands or get the different speed limit signs and so forth.

If you change the region code to other than 5553 (US), then 911 assist will not work. Sirius Travel Link will only work in NA, regardless of region code.

All manufacturers are pressured into this, so it’s not going to get better. The restrictions are hardcoded into the firmware now, there are no adjustments thru FORScan, etc., that will defeat them.