Can I use Reformat method?

I have a 2016 Explorer that came with Sync2. I upgraded to Sync3 earlier this year, but I don’t know for sure what model year my new APIM and screen came from. I know I could take it out and look at the stickers on the back, but I really don’t want to have to do to that.

The Interrogator Tool gave an error when loading the XML file and therefore enabled MY20 Protection.

In the Bezel Diagnostics/APIM/Part Numbers screen in the car, there is nothing listed after “Assembly Part number” or “H/W Part Number”. My understanding is the first one should list the APIM part number and the first letter tells you the model year it came from. A letter less than ‘L’ (2020) should be safe for “Reformat” mode in the updater.

When I look at the car with Forscan, it lists:

I would like to use the Reformat mode to speed the update and to avoid memory errors, but I don’t want to brick my APIM either.

Thank you for any help and guidance.

J series is not MY20 as you researched.
There’s no way of knowing which model the screen assembly is, since it’s not listed anywhere but in the sticker the part has. Issue with MY20 is with the screen, not the APIM itself.

Also, which map version do you currently have installed?.

Thanks for your help in understanding my options and the MY20 issue.

Thanks for the logs.
Interesting, there’s no mention to the APIM’s model in that log…

I don’t know what package I used and am not sure what -AC or -AD is. I just followed the prompts in the program (Syn3 Updater 2.10.6.0) that told me to run Interrogator because I didn’t know what MY my components were.

Based on the screen being the issue, my only option would be to pull it out again and look at the sicker to confirm it is not a MY20 or newer version?

Sadly, yes. The issue with MY20s is that the leaked reformat tool does not have the proper drivers needed for MY20 screens which results in a black screen during reformat (we have some users that were able to recover their units by temporarily using a not-MY20 screen to complete the process on their MY20 units; but to some that didn’t work either)

It’s not likely that a stock not-my20 J series APIM has a my20 screen attached to it, but only way to be certain if you are unsure about the APIM’s origins is to look at the stickers they have.

If I leave the MY20 Protection in place and run the update (as per the log uploaded above), should it work and be safe (but possibly rather slow to complete)?

The log you provided is for a reformat operation, so it would not auto-install, but reformat the unit.

Since you have NA maps, you could perform the update via autoinstall. Here’s a configuration with MY20 enabled: 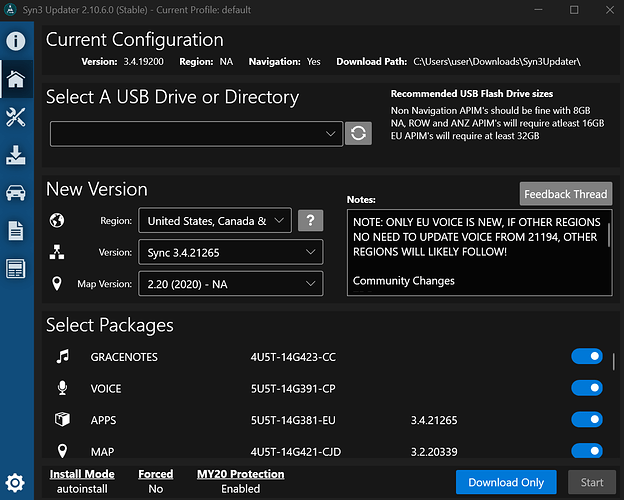 As you can see at the bottom left, it’s auto-install.
More information about auto-installing NA maps can be found here → Tutorial: 2020 North America 2.20 Map Installation (Stand-Alone without Reformat) with Updated NAV_Voice 06/21/2021

And yes, auto-install will be really slow compared to reformat.

Yes, if your unit does not have any MY20 component, reformat should be safe and faster.

I re-ran the Interrogator tool in the program and it created a USB stick with the -AD version. I then swapped in the -AC version and put that in the car, but it gave an error (I didn’t write it down, but can get it if it would help).

I then swapped back in the -AD version and it ran in the car, but the XML file created was the same as the one I uploaded in the prior message (ie. no APIM part number data) and when I try to open the log in the Syn3 Updater program, I get a red error box:

The XML file you have selected could not be read, please ensure this is the
correct file. If you are sure this file is correct, please contact CyanLabs so we can
investigate further.

This is the same error I got when I ran the interrogator utility the first time and why I’m just not sure if my unit is pre-MY20, although I’m pretty sure it is.

If I can provide any additional information to help you/the team figure out why my APIM doesn’t report its model number, please let me know. As I noted in my initial post, it doesn’t show a model number in the Bezel Diagnostics through the screen either, but Forscan seems to know. Very odd.

I think I’ll go pull it from the car and look at the stickers on the APIM and the screen and report back.

Change the extension to TXT and open it in notepad…

Try the -AB version of the interrogator utility. Your hardware is older (Gen 2). It is NOT MY20.

Thank you. I can read the file in Windows just fine, the error came from within the Syn3 Updater program when I tried to load it there.

I have figured out the APIM is okay, but I still haven’t confirmed the screen is not MY20 (although it is very unlikely to be). My upgrade from Sync2 to Sync3 came from Ebay/China (and works great), but I’m not confident the screen and APIM came from the same year/car/donor/wherever.

I think I just need to pull it out and look at it to reassure myself…or just suffer through the slow upgrade process.

If you screen came with the APIM, it’s probably not MY20. The APIM is Gen 2, and would not have had the new screen unless it was replaced when it was sold to you.

If your screen is the part number below or before, it is not MY20. (Meaning JL3T, or beginning with J or K.) 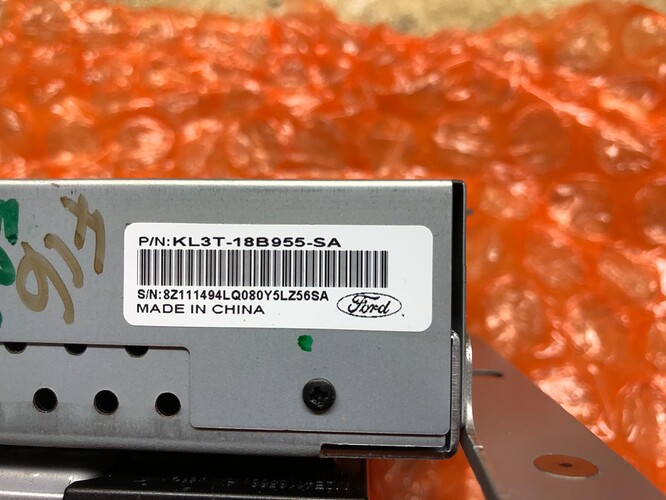 I made the update today. It went perfectly smoothly and took less than 40 minutes. Thank you to all who helped guide me and reassure me.