Trying to update my APIM to the newest version with maps and its not working. This originally was a 4" apim that has 16GB memory. I turned it into a 8" Apim quite a while ago with your updater. Now since I know its got 16GB memory I’m trying to add the maps as well and it just says invalid installation media. Im going to try just updating the non-map apim software and see if it works.

I couldn’t get the apim flashed with even the new non-apim version.
Im now going to try a reformat flash. 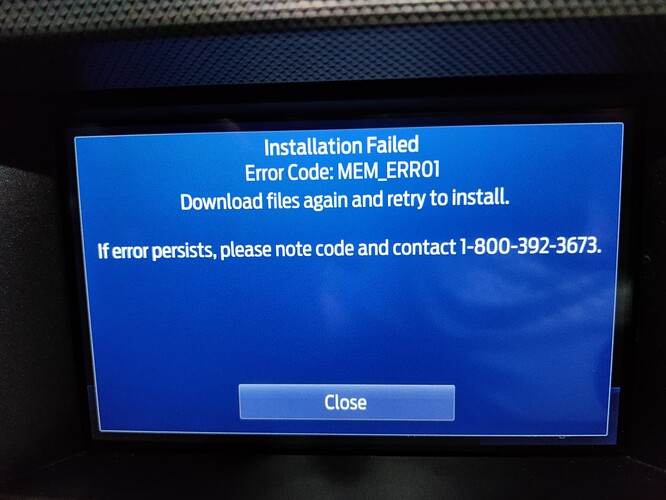 Is this the 5U5T-14G371-LNC unit installed in the vehicle? 16GB will not support NA maps package, and MEM_ERR01 shows that. Not enough space.

When you reformat, you might get a black screen. Which screen is connected to the unit? I know you replaced it with the 8" version, but you didn’t say which part number you used in the last thread.

I don’t know what part number screen it is but it’s from a 2017 Mustang.

Will it error if it runs out of memory?

My original factory APIM LR3T-14G370-BLN is what is in there.

I might have caused this issue when I was originally trying the update. It said it was restarting the unit and I removed the USB when it did.

I was driving at the time so I just didn’t read it well.

I think Ford has locked APIMs now so you can’t convert them to NAV ones or I corrupted the drive partitions.

Currently, everything is working fine on SYNC 3.4.21194 but I had auto update on and Ford notified me of an update and asked me to go restart my car a few days ago.

Didn’t take that either. Package Error 04.

Not sure what you have read, but I think you are mistaking “USB size” with “APIM Storage”.
For USB creation, you need 32 GB for EU and 16 GB for NA, but since the contents on the USB are compressed, you need more than that on the APIM, since you need work storage for uncompressing and final allocation.

Again, not sure what you have been reading, but all this I’m saying to you is well documented…

Re-Format on MY20 black screen is from using a MY20 screen which I am not.

I’m sorry, we are not IT Support, unless you are paying us a membership, which I do not think it’s the case

(this may be harsh, but do not take it the wrong way)

You said you got that error, I’ve just explained what it means.
With that, do whatever you want, reformat or not. Not sure what you are trying to do

Just by looking at your link I can easily say it says 16GB is good for NA.

I also already figured out the Package Error if you read my post.

I will be attempting to reformat shortly.

Just by looking at your link I can easily say it says 16GB is good for NA.

Ok, good luck with that.

Just one more thing, are you talking about a NAV or non-NAV system?

It says it IN the program.

Are you saying your manuals are wrong? 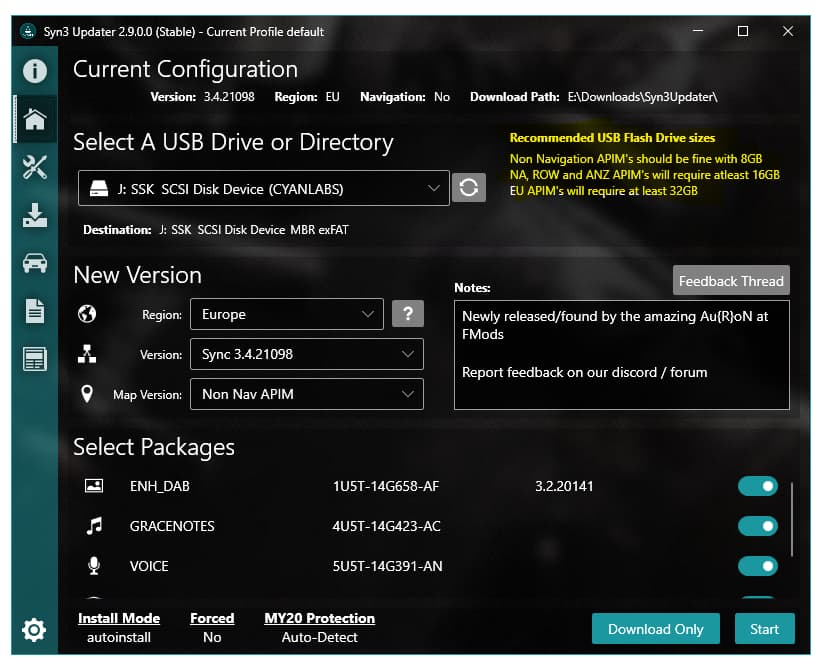 “Recommended USB Flash Drives sizes”, APIM size depend on what you are installing!!!

Ok, if you do not need maps and 3.4 is not updating, check this thread → Tutorial: Sync 3.4 NON-NAV APIM: Failure to Update to Newer Version Sync 3.4

For NA non-NAV, 16 GB APIM should be enough. The previous link will tell you how to free up some space to perform the upgrade. After that, you may or may not be able to install all packages again.

I read the whole thing and no where does it talk about the actual beginning size of the APIM memory.

So trying to reformat gives a packaging error.

I need to try to figure out how to clear out the memory I think my previous attempt used up all the memory.

The only way to remove the map remnants is to reformat.

It won’t take the reformat package. I’m going to attempt a downgrade to 3.4.19101 and try to reformat upgrade it again.