Does the unit work right now?

So trying to reformat gives a packaging error.

You need to downgrade and reformat… this has already been said though.
https://cyanlabs.net/docs/syn3updater/page/the-different-install-modes

again, you have no memory left, you need to downgrade and reformat
https://cyanlabs.net/docs/syn3updater/page/the-different-install-modes

Im aware I said that I was going to.

The problem is your tutorials are not easily found on the forums and its far easier to find threads that apparently are giving the wrong information. Pushing it back down to 19502 now

Re-Format on MY20 black screen is from using a MY20 screen which I am not.

What? if you are not my20 and using a older screen you should DEFINITELY just downgrade and reformat.

I was confused as when I changed it to an 8" screen I only did a reformat I did not downgrade. Im not sure why it worked then.

Again if you read the documentation you would know this. Ford blacklisted the reformat package after 3.4.19200, in order to use the reformat you must downgrade. 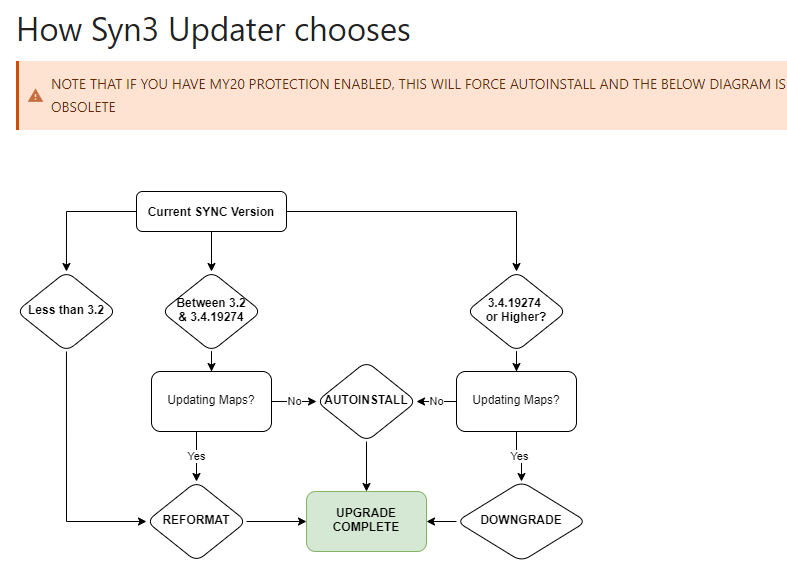 Downgraded successfully but once I tried to reformat upgrade it it shut off and won’t come back on at all, hard reset didnt do anything. It also isnt reading any usb drive. Guess im gonna have to take it to ford to get the apim replaced or reflashed now.

When you reformat, you might get a black screen. Which screen is connected to the unit? I know you replaced it with the 8" version, but you didn’t say which part number you used in the last thread.

My original factory APIM LR3T-14G370-BLN is what is in there.
I don’t know what part number screen it is but it’s from a 2017 Mustang

You said that you reformatted this unit before when you converted to the 8" screen? I think it was changing the software…

Anyways, here is how you fixed it last time…
So a detail of what I did. Put the USB in and the 4" display on the 8" inch screen said updating. Waited for like 10 min then pulled the USB out while it wasn’t being used thinking it wasn’t working. Rebooted the car and now the 8" inch screen was black. Used Ford’s Reset procedure to reboot the APIM and it booted into the 8" display with everything working.

I have a USB with a light on it and after it rebooted and went black screen no more data was being read from the drive.

It my fault for experimenting with no backup.

If this reset doesn’t fix it I take it to Ford and play dumb but I’ll probably end up paying for a new one if they can’t flash it back with IDS.

Even if they can flash it I don’t know if that would turn it back to a 4" apim.

The APIM is on and functioning according to Forscan. I tried a module reset but it didnt do anything.

I’m going to try an auto-upgrade USB with the reset to see if I can get it back.

Is there a way to force the apim into new boot mode if the USBs are not working?

I’m confused: is any component MY20 or later?

APIM is a MY20(2021) and my screen is a 2017. I was talking with the discord and it seems like the APIM is stuck trying to boot into flash mode but the partition must be corrupt somehow.

Im going to Ford tomorrow morning to see if there is anything besides replacement they can do here in Florida.

If I end up having to buy one and not a warranty I’ll give this one to someone locally for research and expirmentation or do the same myself.

There are basically 3 people (4 counting you) interchanging information here in this thread, which includes the creator of Syn3updater, the Neo in the Synctrix and myself (an enthusiasts noob). Not sure how we got here, but none of us 3 flagged that as an issue, otherwise we would had not mentioned reformat.

And also, several warnings about reformating a MY20 were ignored, many on this very thread, and some others on Syn3updater.

Have you tried this already?

If you have tried that without results, then yeah, not sure it’s recoverable.

Is the unit under warranty?.
If so, put everything back together and just play dumb at the dealer; they will most likely change it as failed equipment.

Yeah, I only have an extra sync 2 screens in the garage. Not compatible at all. I’m hitting the dealer up tomorrow to change my failed component.

If the dealer reloads the software they will use the 4" screen Sync software and asbuilt, as that is what is in the OEM asbuilt (most likely). At that point the dealer might catch the change to an 8" screen and the FCIM change. Be prepared for that. If they do, they will probably not cover anything.

One thing to try before you go to the dealer is to reload the asbuilt entirely. Just the one you have now. It will probably say there are no changes, but load it anyways, choose “Force Program’. Then Master Reset and see what happens…or put the 4” screen and old FCIM back together and load the old Sync 4" software and asbuilt, then Master Reset. At least if it comes back, you have been there before.

If you end up buying one yourself, this will be the best one for the car as far as compatibility but not a MY20+ unit. This is an example for illustration…

The dealer wouldn’t even be able to touch it for 10 days. I tried reflashing the as-built twice and it takes but the apim wont fully boot.

Here’s what I think happen, since I was screwing around with the nav vs non-nav I think I might have screwed up the boot partitions. This only happened after I told the apim to go in boot load mode.

If only I could get a serial connection to it with command prompt I could repair the partitions and tell it to load into the software.

Oh well. Im going to either try to find a 2020+ apim for the TCU compatibility or just go with an android tesla screen and shut the TCU off.

Found a place 2 hours away in Orlando FL that specializes in repair and reprogramming. $220 shipping included will be back by Friday with the software reloaded.

The guy I talked to said he has the ability to flash the software externally if he has to.

Best part its a company so no shady business.