Any experts within the forum’s community that can tell me how to get the SiriusXM album art and channel logos? See shared screenshots below. Is their presence a product of a firmware version and/or hardware version? Which module(s) control these features? The APIM and/or the ACM? Please share what details you know as accurate.

(I do know that both examples are running Sync v3.4. The unit with the album art/channel logos is actually a build earlier than mine.) 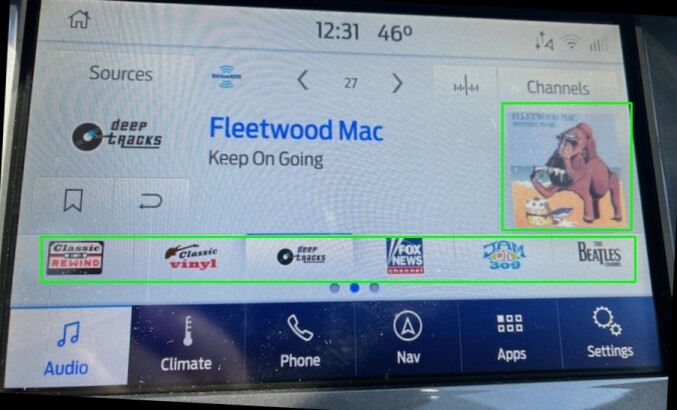 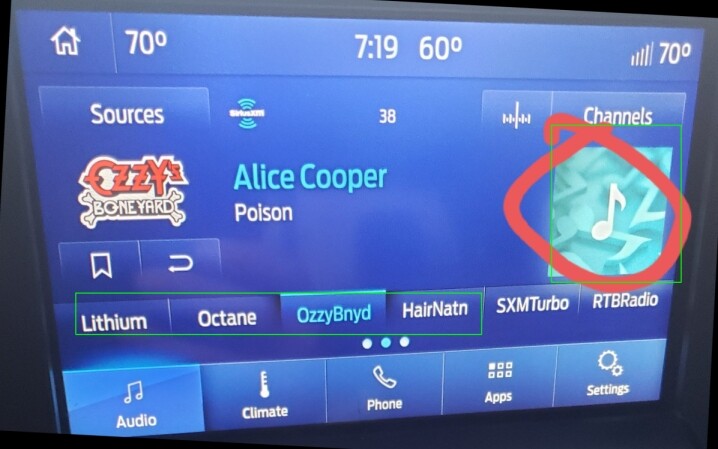 Channel logos are embedded in the Sync software application, except for the ‘special occasion’ channels. These are transmitted over the air as needed just as the album art below.

Album Art is transmitted OTA (over the air).within the program stream as metadata and is decoded by the receiver, in this case the ACM. The metadata is then transported to the APIM via the SDL (Satellite Data Link) connections (more than one) to be processed and displayed on the screen. This works the same way as DAB in EU for the most part, except SiriusXM is satellite based rather than terrestrial. By the way…, Gracenotes has nothing to do with this.

In late 2019, Ford switched over to the XM chipset and finally discontinued the use of the old Sirius platform for new products going forward. Previous generations of ACM hardware cannot support the XM feature set that produces the layout in the top picture, nor did Ford include such abilities.

So it comes down to who has what hardware with the capabilities to render the metadata. Different Ford/Lincoln model lines are not equal in this respect. And some other manufacturers have been doing this for years, while some just don’t.

Thank you for the detailed explanation I was looking for. One question though. Could I install a newer (say 2020+) ACM to get my desired results? Also, assuming the wiring harness connections are the same between mine and newer.

Could I install a newer (say 2020+) ACM to get my desired results? Also, assuming the wiring harness connections are the same between mine and newer.

The wiring harness connections are not the same. However, it is possible to retrofit a MY20 ACM. (Not a MY21+ though.) This would be a place to start to understand the wiring and FORScan programming. This is taken from another thread…

For this discussion, MY20 would be ‘L’ series ACM modules. I believe that most if not all MY20 ACM’s have different connectors than the MY19 and earlier units. You can use an MY20 ACM in previous year vehicles, but you will need to rewire or replace the connectors as well as reprogram a few things in the asbuilt.

The A2B protocol/connector thing is not an issue. This is an additional connection that was added to provide a digital connection to the new amplifiers from B&O, Revel, etc. Provided that the ACM is programmed correctly, you can still use the analog connections for the previous generation of amplifiers like Sony, Kicker, etc. This connection and the implementation is largely misunderstood.

EDIT: I recently looked at a MY2021 ACM asbuilt database and found that the new ACM’s have the ability to turn off the A2B function completely. This consistent with asbuilt settings for the 2018+ ACM’s.

I have a late model MY19 ACM in my 2015 F150 Platinum with the Sony system. The MY19 ACM still has the previous connectors, so minor rewiring adding the SDL links. The reason I changed it was to gain access to the new SiriusXM tuners to improve the SiriusXM performance and expanded channels. It required some additional wiring for the SDL (Satellite Data Links) between the ACM and APIM. This information is included here:
2020 APIM/Screen and 2020 ACM Compatibility - Ford / Hardware - CyanLabs Official Community

Thank you again. Seems like it might be more $$ and trouble than it would be worth to me. Appreciate the info.